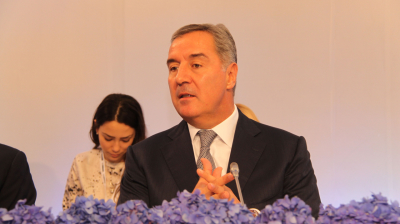 Milo Djukanovic could be forced out of power after being either Montenegro’s president or prime minister for most of the last 25 years.
By Clare Nuttall in Bucharest October 12, 2016

Geopolitical issues have dominated the campaign ahead of Montenegro’s October 16 general election, as Moscow-backed opposition parties seek to put the brakes on the tiny country’s progress towards Nato accession.

Polls show the election is on a knife edge, with Prime Minister Milo Djukanovic’s Democratic Party of Socialists (DPS) just one point ahead of a recently-formed coalition of opposition parties determined to oust the DPS. This could see Djukanovic forced out of power after being either Montenegro’s president or prime minister for most of the last 25 years.

It’s possible that Djukanovic will scrape together a majority with Pozitivna Crna Gora, if the small party manages to take seats in the parliament. If not, the DPS’s former coalition party, the Social Democratic Party (SDP) will play kingmaker in an election that is set to determine Montenegro’s geopolitical course.

The agreement on Montenegro’s membership is currently being ratified by Nato members and the country is most likely to join in the first half of 2017 - depending on the outcome of the general election.

Several Montenegrin opposition parties, in particular the Democratic Front (DF), are determined to steer the country away from Nato membership - in some cases even away from EU integration - and back towards Moscow. They want a referendum to be held on whether Montenegro, which received an invitation from Nato in December 2015, should join the alliance.

A group of opposition parties - the Kljuc (Key) coalition, the DF and the Demokratska Crna Gora party - recently signed an agreement to form a new government if they manage to defeat the DPS.

At a rally in Djukanovic’s hometown Niksic on October 9, Branko Radulovic, one of the leaders of the DF, stressed that a referendum on Nato membership would be held after the election if the prime minister and ruling party are ousted. The fate of the country will be decided “in Montenegro and not in various embassies”, Radulovic told supporters.

However, it’s not clear whether a referendum would have the desired results for the opposition; polls show a gradual shift from a roughly 50/50 split on the issue to a majority in favour of Nato entry.

Zlatko Vujovic, president of the governing board of Montenegrin think tank Centre for Monitoring and Research (CEMI), says Montenegro’s geopolitical orientation has been the main issue during the campaign. “International policy issues are very important. The conflict between Russia and the US and EU is dominant, especially because Montenegro has signed an accession protocol with Nato, and could join in the first half of 2017. There has been a huge investment by the opposition and some entities from Russia to stop that process,” he tells bne IntelliNews.

It’s no surprise that Moscow has been resistant to Montenegro joining Nato. The tiny Adriatic country has long been a favoured holiday and investment destination for Russians.

However, without ever making a dramatic pivot, Podgorica has been increasingly oriented towards the West; like the other Western Balkan nations its top international goal is entry to the EU. Prioritising EU (and to a lesser extent Nato) accession has meant making choices between the West and Russia, most importantly the decision to join western sanctions against Russia, which Montenegro did in 2014.

This angered Moscow, which has seen its former allies in the Balkans slipping away. Even Serbia failed to line up with Moscow over the recent referendum in Bosnia’s Republika Srpska, evidently because progress on its EU accession path was more important.

Now, Russia’s allies in the region are dwindling to tiny enclaves like Republika Srpska (whose president visited Moscow immediately before the referendum) and the breakaway Moldovan republic of Transnistria.

Djukanovic openly accused Russia of meddling in Montenegrin politics in October 2015, when Podgorica was waiting for Nato’s decision on the country’s membership. He accused Russia of trying to stir up opposition parties - which had staged a series of protests often ending in clashes with police - with the aim of presenting an image of instability. Djukanovic also claimed that nationalists from Belgrade (who believe their country should still be allied with Serbia) along with the Serbian Orthodox church were backing the protesters.

A year later, there are widespread claims of Russian funding for the opposition. The DF has produced a series of lavish and professional campaign adverts, which many in Montenegro claim were made with funding from Russia.

One shows Montenegrins giving bribes to officials, with the largest - a whole briefcase full of notes - being handed over to a Djukanovic lookalike in the presidential office. “Corruption in Montenegro begins with one man,” says the video, which ends with the Djukanovic lookalike exiting his office with his personal possessions in a cardboard box.

More worryingly, the DF has already raised questions about the legitimacy of the elections. Unlike other opposition parties, it opted against signing up to a power sharing deal with the DPS aimed at ensuring the legitimacy of the elections. As part of the effort to ensure free and fair elections, opposition parties were invited to take over several ministries earlier this year.

The process has not been perfect - notably Internal Affairs Minister Goran Danilovic, one of the opposition appointees, refused to sign off the electoral roll because of serious irregularities. This was party because of the technical difficulties in collating data from several different registries, but there are also reports that DPS appointees within the ministry had obstructed Danilovic’s efforts to sort out the problems ahead of the elections. However, it is seen as at least a first step towards fairer, less contentious elections.

“A lot of effort has been invested to have legitimate elections. There are some risks and concerns but I think we have a lot of the tools to organise a good election,” says Vujovic. “State abuses have been prevented, at least to some extent, by the inclusion of opposition ministers in the government.” He forecasts that while imperfect, the October election will at least be “decent” and will lay the groundwork for the next presidential election.

Indeed for the first time in Montenegro’s decade of independence, the collapse of the long-standing DPS-SDP coalition means the election is anyone’s game. The two sides are now fighting to control Montenegro’s future direction.