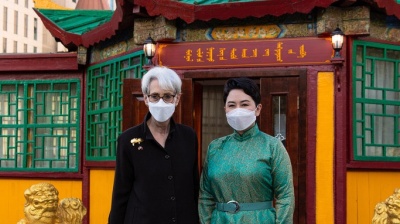 Amarsaikhan Sainbuyan, Mongolia's deputy prime minister, and Battsetseg Batmunkh, Mongolia's foreign minister, have spoken to the press about Russia's invasion of Ukraine. They outlined plans to repatriate Mongolian nationals from Ukraine, but did not condemn Russia’s action. Both described the invasion as a military operation and an armed struggle in Ukraine.

Mongolian officials are unlikely to come out against the Ukraine invasion, given the Kremlin's stranglehold over fuel provision to Mongolia. The country imports more than 98% of its automobile fuel from Russia.

One official discussed possible benefits of sanctions against Russia with reporters. Yondon Gelen, Mongolia's Minister of Mining and Heavy Industries, said: "If sanctions on Russia are imposed, they could have a beneficial effect on us." He said that "since we purchase fuel from Russia at the Singapore exchange rate", Mongolia does not bargain with Rosneft, Mongolia's largest fuel supplier.

According to a Mongolian student who attends the Donbas State Technical University and spoke with local news website Tovch, the Mongolian foreign affairs ministry refused to listen to their pleas to take note that a Russian attack on Ukraine was imminent, telling the students to provide proof if an attack was indeed impending. When the attack did occur, "they told us to find transportation to the Ukrainian border to Poland when all other modes of transportation became unavailable."

Battsetseg told the media: "Currently, Ukrainian flights are suspended, and if the air border is not opened soon, citizens will transport by road through Poland and Hungary."