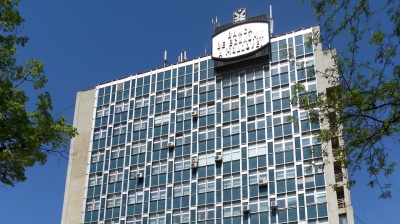 The Ukrainian authorities reportedly detained Veaceslav Platon - a well known corporate raider - in Kyiv on July 25, after anti-corruption prosecutors in Chisinau issued a 30-day arrest warrant in his name earlier in the day in extended investigations related to the theft of the $1bn from the banking system.

The arrest comes in the context of an apparent struggle for control of several local banks between Platon and Vlad Plahotnuic, the powerful Moldovan oligarch behind the current government, who is also believed to exercise a strong influence over the Moldovan judicial system.

Platon was the author of several large-scale raider attacks in the former Soviet space in the past decade. He is reportedly suspected of having laundered large amounts of Russian money through Moldovan banks, with the cooperation of corrupt judges. The authorities in Kyiv are checking for his possible involvement in frauds on Ukraine’s territory.

The prosecution office in Kiev announced the detention of a Moldovan businessman on its Facebook page on July 25, without disclosing his identity. But unofficial sources, as well as a picture taken at the moment of the arrest and later circulated on social media, confirmed his identity.

Around $1bn was siphoned off from three Moldovan banks - Banca de Economii, Banca Sociala and UniBank - with most of the money disappearing in late 2014. Successive Moldovan governments have been criticised for their lack of progress in bringing those responsible for the massive frauds to justice.

The head of the Moldovan anticorruption prosecution office, Viorel Moraru, said that two people were arrested during searches carried in the morning of July 25 at the offices of several Moldovan banks. A 30-day arrest warrant was issued for Platon, Moraru added, quoted by agora.md.

“The anticorruption prosecutors in cooperation with the employees of the national anti-corruption centre CNA have carried out searches and confiscated [evidence] in relation to the theft of the money from the Moldovan savings bank Banca de Economii (BEM). The prosecutors visited five firms and Victoriabank, Moldonconbank, Moldova Agroindbank and the insurance company Asito,” Moraru explained.

Platon is believed to control stakes in Moldonconbank and Moldova Agroindbank via numerous small shareholders, and to be a former indirect shareholder in Victoriabank.

“The investigations were needed in order to establish a connection between Veaceslav Platon and the money laundering within Banca de Economii. A connection was established between the extended investigation of the theft of the $1bn and the transfer through a Moldovan bank of money coming from another country by court orders. These actions were coordinated by the same individual. This fact is proved by documents, material evidences that have been confiscated this morning [July 25] from the offices I mentioned,” Moraru stated.

However, Platon was arrested the day after he claimed to be the subject of a conspiracy coordinated by his former ally Plahotniuc, who he said was trying to hide the identity of the true beneficiary of the $1bn frauds in the Moldovan banking system.

Commenting on the criminal investigations started by Moldovan prosecutors, Platon told unimedia.md from Kyiv that he was ready to provide details about the frauds, but not to the anticorruption prosecution office which he suspected of being involved in the conspiracy.

Following Platon's arrest, Moldovan politician Renato Usatii told unimedia.md that Plahotniuc has used his influence over prosecutors with the final aim of forcing Platon to sell his participation in Moldindconbank and Moldova Agroindbank (MAIB). Plahotniuc has already taken control of Victoriabank and wants the other two banks currently controlled by Platon, but the latter does not want to sell, Usatii claimed.

Platon is suspected of having taken control over MAIB in 2013 through firms registered in UK, Cyprus and the Baltic states. In March, Moldova’s central bank blocked the voting and other rights of shareholders holding nearly 40% of MAIB shares after they were found to have been illegally coordinating their actions. The shareholders were also asked to sell their shares within three months.

Usatii’s comment also appears to confirm rumours that Plahotnuic had taken over control of Victoriabank, which was previously controlled by Platon. This implies that the declared beneficiary of 40% of Victoriabank, Sergey Lobanov, is a proxy for Plahotnuic. Minority shareholder the European Bank for Reconstruction and Development (EBRD) has been struggling to restore corporate governance at Victoriabank.

Meanwhile, Moldova’s second largest bank Moldindconbank is looking for a strategic investor, after it was revealed to have been involved in the illegal transfer of $46bn from Russia, which is currently being investigated by authorities in Moscow.

UK, Canada impose sanctions on Lukashenko and his top officials
11 hours ago
Poland tightens restrictions in response to rising coronavirus cases
12 hours ago
World must tell Turkey to “get out” of Caucasus says Armenian PM
15 hours ago
French President Macron promises Belarus’ opposition leader Tikhanovskaya to do all he can to help
1 day ago
Nobel laureate and Coordinating Council member Svetlana Alexievich leaves Belarus for medical treatment in Germany
1 day ago