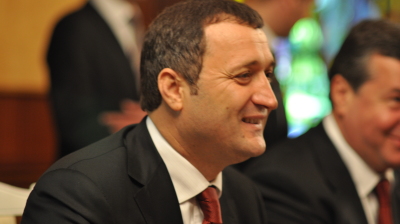 Filat has denied the accusations, claiming he is a victim of a political conflict with his rival Vlad Plahotniuc of the ruling Democrat Party. / Photo: CC
By bne IntelliNews June 27, 2016

Former Moldovan Prime Minister Vlad Filat has been sentenced to nine years in prison and fined €4,600 for passive corruption and influence peddling in connection to the $1bn frauds that have shaken the country's banking system, local media reported on June 27. The trial will, however, continue at a higher court, as both Filat and prosecutors already announced plans to appeal the decision.

Filat will have goods worth MDL4mn confiscated, sources indicated, a strikingly small amount compared to the $250mn size of the alleged bribe.

Filat, at that time the leader of the Liberal Democrat Partly (PLDM), was detained in October based on the testimony of local businessman Ilan Shor, the main suspect in the $1bn frauds as identified by the investigations of the Kroll consultancy firm. His arrest has been extended several times since then.

Shor testified he paid a $250mn bribe to Filat, of which $190mn was for instructing the government not to exert pre-emptive rights and thus allow the private investors represented by Shor to take control over Banca de Economii (BEM). The money was taken from BEM as loans to his own firms, Shor admitted, but he claimed that the money was later transferred to Filat.

Filat has denied the accusations, claiming he is a victim of a political conflict and he pointed to his political rival Vlad Plahotniuc, currently political coordinator of the ruling coalition and the mastermind of the senior ruling Democrat Party (PDM).

The sentence, which is not final and can be challenged, is much lower than the 19-year imprisonment sentence demanded by the prosecutors. Filat himself was expecting a longer sentence. At the beginning of the month, Filat wrote on his Facebook page that the sentence “has already been whispered to the judges and the prosecutors” and will envisage between 16 and 18 years imprisonment.

The Buiucani court also ruled that Filat should be fined MDL60,000 (€4,600)and should not be allowed to hold a public post for a period of five years. The court also ordered that some of the goods, including real estate and vehicles, acquired in connection to the case, should be confiscated.

Last year, Shor claimed that Filat had asked him for more than $190mn in return for instructing the state authorities to allow a capital increase at Banca de Economii, which diluted the state’s participation in the bank to 33%. Following the dilution, Shor’s group of firms took control of the bank.

Shor has also claimed he has paid Filat $60mn in exchange for his assistance in appointing him Moldova’s honorary representative in Russia and in securing a licence for trade of oil products. Filat also allegedly made sure state authorities do not check Shor's firm Dufremol.

Meanwhile, Shor has been remanded in custody for 30 days by a court over allegations of “money laundering and an extremely large-scale scam”. Prosecutor Adriana Betisor, the same prosecutor as in Filat’s case, said the case is not related to that of Vlad Filat.

Filat called the court’s ruling illegal and announced that he would take the case to the European Court of Human Rights.

“This is an illegal ruling. The fact that this trial was not public proves that the ruling is illegal. You should have seen the prosecutors’ evidence. It is not true. I will take the case to the European Court of Human Rights,” Filat said, according to Unimedia.info.

Filat has repeatedly claimed he has been a victim of abuse by prosecutors and members of the court.  The former prime minister even went on hunger strike at the end of May, but gave up on June 21 after he fainted in court the same day.

Prosecutor Betisor also said she was not content with the ruling, considering the sentence too mild. “It will undoubtedly be appealed,” Betisor said.