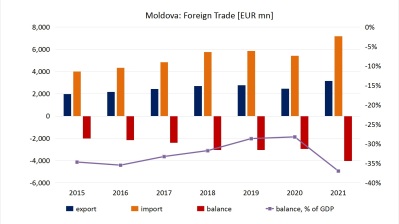 The subdued economic activity in 2020 resulted in a smaller trade deficit, but the gap returned to higher levels once the economy returned to normal. Higher oil and gas prices contributed to the deterioration of Moldova’s external balance. The country is fully dependent on the import of oil.

Romania remained the biggest market for Moldova’s exporters by far ($833.5mn, 26.5% of the total), and Turkey ($314.0mn, 10% of the total) surpassed Russia as the second-largest market after soaring by 1.8 times y/y. Russia remained an important market for Moldova, nevertheless, with a share of 8.8% ($276.0mn). Germany is becoming an increasingly important market and may surpass Russia if more foreign investors develop production facilities in Moldova. In 2021, Moldova’s exports to Germany rose by 8.8% y/y to $245.5mn.

At the same time, markets that have been not that large for Moldova are increasing fast: exports to Spain, Greece and Hungary have more than doubled and exceed $10mn each in 2021.

Cereal exports made an important contribution to the overall rise of Moldova’s exports in 2021, as the value of the cereals exported last year nearly tripled in y/y terms to $389mn. Exports of oilseeds also increased by 15% y/y to $256mn. Exports of parts of electric household goods — the single largest export item — increased by only 10% y/y, but given their size ($522mn in 2021) this resulted in a significant 1.9pp contribution to the growth of exports last year.