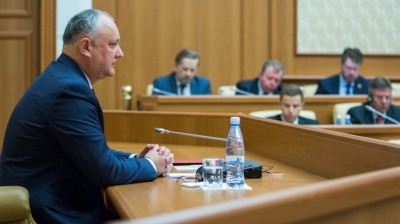 President Igor Dodon meets with with foreign ambassadors in Chisinau. / presedinte.md
By Iulian Ernst in Bucharest May 16, 2019

Moldova’s President Igor Dodon will dissolve the parliament unless the lawmakers elect their leading bodies, the president announced at meeting with foreign ambassadors in Chisinau on May 15.

The country’s new parliament, that resulted from the general election on February 24, has been summoned only once, on March 21, and the meeting was chaired at that time, in line with the constitutional provisions, by the most senior MP.

The parliament is largely split between three main forces: Dodon’s Socialist Party, Democratic Party of oligarch Vlad Plahotniuc and the pro-EU ACUM alliance made up of the PAS and PPDA parties. None of the three have so far managed to find sufficient common ground to form a parliamentary majority.

Dodon’s statement comes after the Constitutional Court of Moldova ruled, answering an inquiry from the presidency, that the president cannot nominate a prime minister candidate unless the parliament elects its leading bodies, including a speaker.

Constitutional Court’s ruling bans, de facto, hidden alliances in parliament to support a minority government. The ruling, criticised by two of the three main political forces in Moldova based on constitutional provisions (the Democratic Party has abstained from public comments recently), has some logic though: since the parliament cannot elect its leading body, it is going to be dissolved anyway.

The first reactions to court’s ruling came, not surprisingly, from the PAS and PPDA. ACUM proposed that the Socialist Party join it in an informal “anti-oligarchic” alliance aimed at replacing the politically-biased heads of public institutions appointed by Plahotniuc. The Socialists insisted, however, on a formal alliance.

The court’s ruling also prevents an informal alliance between Dodon and the Democratic Party — a scenario broadly expected by analysts but openly prohibited by Russia, which has strong influence over Dodon and his party.