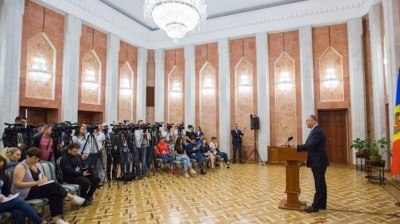 Moldova’s President Igor Dodon on May 22 asked the Constitutional Court to explain whether the presidency is entitled to dissolve the parliament.

Snap elections have become the baseline scenario in Moldova three months after the elections on February 24, as none of the three major forces in the parliament have managed to form a government.

The outcome of the February 24 ballot left little room for a majority. The pro-Russian Socialist Party holds 35 seats in the 101-seat legislative, followed by the Democratic Party with 30 mandates and the pro-EU ACUM alliance with 26 mandates. Also in the parliament are the party of convicted fraudster Ilan Shor (seven seats) and three independent MPs.

“I condemn the political egotism and the exaggerated ambitions of some MPs and parliamentary groups. I reiterate once again that the citizens of the Republic of Moldova are waiting for results, they are waiting for the creation of the parliamentary majority and the deputies have to start working,” Dodon told a press conference, a statement from the presidency said.

“I am addressing elected MPs who receive salaries 10 times higher than the average country pension with the call to form a parliamentary majority and a government.”

Dodon asked the Constitutional Court whether he can dissolve the parliament three months after the validation of the elections on March 9, or after the first (and last) meeting of the lawmakers on March 21.

Article 85 of the Constitution says that the president is entitled to dissolve the parliament if the activity of the legislative is blocked for three months.

Dodon previously asked the Constitutional Court for permission to nominate a candidate for prime minister before the parliament elects its leading bodies including the speaker. But the court denied the request, banning de facto the formation of an informal alliance between two of the three main political blocks in the country’s parliament.

Two such informal alliances were envisaged, both involving President’s Socialist Party that won the largest number of seats in the legislative, alongside either businessman Vlad Plahotniuc’s Democratic Party or ACUM.

However it turned out that none of the possible combinations among the three main parties was politically possible.

Forecasts that Plahotniuc, the head of the former ruling majority and incumbent government, would manage to convince enough MPs from other parties to join his Democratic Party and form a majority were also not realised.

Specifically, disagreements between the two parties that make up the ACUM alliance — the Action and Solidarity Party (PAS) of Maia Sandu and the Dignity and Truth political party (PPDA) of Andrei Nastase — are surfacing, possibly weakening their position in a repeated ballot. This would benefit the other two major parties, particularly Dodon’s Socialists. This might explain the president being ready to call snap elections.