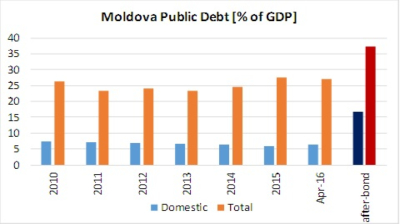 Moldova’s government has endorsed and submitted to lawmakers for approval a bill on the planned issuance of MDL13.6bn (€610mn) of government bonds, which the government will use to repay the central bank for emergency aid extended to three troubled banks in 2014-2015.

In March, the government and the National Bank of Moldova (BNM) signed a memorandum of understanding on the conversion of emergency aid extended to three troubled banks into government bonds. The banks received MDL13.6bn (€610mn) of aid - equivalent to 11% of Moldova’s GDP - from the central bank with state guarantees in 2014 and 2015.

The government required lawmakers to review and vote on the bill under emergency procedures. The volume of the bonds will be adjusted if any funds are recovered from the three troubled banks, the government said.

Liquidation procedures have been launched at the three banks - Banca de Economii, Banca Sociala and Unibank.

Based on the latest GDP forecast from the ministry of economy, and on the schedule of the maturities and coupons planned by the government, the service of the bonds would account for 0.5% of GDP in 2017-2019.

The bond issue will nearly triple the country’s current domestic debt (6.4% of GDP) and push total public debt to some 37% of GDP. The country’s external debt, some 20.5% of GDP, is financed mainly from international financial institutions at preferential interest rates of around 1%. The domestic debt is financed from bills and bonds with maturities of under three years.

Yields in auctions on the primary market decreased during May, after the central bank cut the monetary policy interest rate from 19.5% to 13% in four steps this year. However, the Treasury has to pay double digit yields on the bonds and bills, and the coupons announced for the MDL13.6bn bonds look not attractive. Sold by the central bank at a discount on the secondary market, they could, however, attract investor interest, paving the way for a more active local capital market.

The yields on the first bills issued in June dropped by 9pp-10pp to around 11% compared to the bills issued in the first auctions in May, at yields of 20%-21%, according to data published by the central bank. The coupon payable on a semi-annual basis on the two-year bond - which is the sole maturity available for Moldovan bonds - is calculated for a yield of 16.25% in June, down from 23.32% in May.