Moldova’s economy severely hit by war in Ukraine with 10.3% y/y contraction in Q3 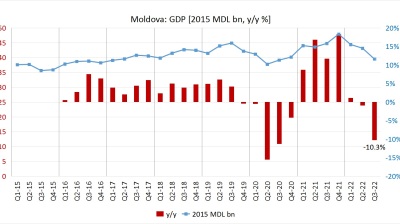 Moldova’s GDP plunged by 8.4% q/q (seasonally adjusted terms) in Q3, when it marked a 10.3% y/y contraction, according to the statistics bureau BNS.

The figures are significantly below the expectations of the government, international financial institutions (IFIs) and independent analysts, who were expecting a 3% contraction for the whole year.

In the first three quarters of 2022, the country’s GDP contracted by 4.1% y/y and the base effects are not favourable for the last quarter of the year.

Speaking of Q3 alone, the 21.4% plunge in the agriculture production contributed 3.5pp to the overall 10.3% y/y contraction. Significant negative contributions on the formation side were made by the sector of services to households (trade included, -1.9pp) and real estate (-1.2pp).

The manufacturing industries contracted by 12.4% y/y in terms of value-added and contributed 1.2pp to the quarter’s overall negative performance.

Net taxes collected dropped by 8.7% y/y as a result of significant subsidies extended to households and firms, contributing a negative 1.2pp to the quarter’s GDP as well.

On the utilisation side, final consumption contracted by 4.8% y/y and gross fixed capital formation by 4.4% y/y.

The utilisation of foreign resources has increased to reach 24% of the combined domestic demand (consumption and investments) in Q3. Exports of goods and services rose by 11% y/y in volume terms, while imports soared by 21% y/y.

INTERVIEW: Helen Rodwell, head of CMS’ corporate practice in CEE
Russian foreign minister speaks of Moldova as the “next Ukraine”
M&A in Emerging Europe fell by 20% to €32.93bn in 2022