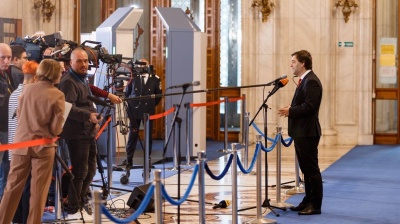 Moldova’s Foreign Affairs Minister Nicu Popescu attended the Nato meeting in Bucharest on November 29-30, the first time the country has been represented at a summit of the Alliance's foreign ministers.

Popescu was present alongside the foreign ministers of Bosnia & Herzegovina and Georgia, two countries that unlike Moldova envisage membership of the alliance. However, he commented afterwards that Nato membership remains out of the question for Moldova and no concrete steps have been taken on collaboration.

Nato allies agreed to step up tailored support to these three partners, including on capacity-building, reform and training to improve their security and defence institutions.

They pledged on November 30 to help Moldova, Georgia and Bosnia, as they face pressure from Russia, Nato Secretary General Jens Stoltenberg and ministers said.

"If there is one lesson from Ukraine it is that we need to support them now," Stoltenberg told a news conference.

Moldova needs a functioning army and the talks with its development partners include “the entire range of equipment of a modern army needs”, Popescu answered in general terms when asked whether his country will receive lethal weapons from Nato countries.

Nothing concrete was discussed at the summit, Popescu said, stressing that his country’s ongoing talks with foreign partners on defence issues are not something new, as Moldova “has a military partnership with the United States, with Romania and other western countries since the ’90s”.

Nato membership is out of the question, he said, “because of the constitution.”

“The decision, stricto sensu was not a decision, but there was a consensus, was that we need to intensify our relations — and the military experts will discuss in detail what exactly this intensification entails,” he added.

“We did not discuss today concrete things, but obviously, these discussions and interactions between Moldova and Nato are not limited to general matters — concrete things are also discussed, but in other formats, so far as I understand.”

Popescu, who has served a foreign minister in the government formed after pro-EU forces won both the presidential and general elections in 2020-2021, delivered a very moderate and cautious message in the interview he gave to Radio Free Europe in Bucharest.

Among the non-Nato countries that attended the Bucharest meeting, Moldova is the only one that has not considered yet applying for membership and will probably not, in the foreseeable future.

Asked about this topic, Popescu only confirmed that “there are ongoing public debates about this” and “the opinions are diverse”.

“It’s [because of] the constitution [that Moldova never envisaged Nato membership],” Popescu explained.

Despite its pro-EU government and president, pro-Russian sentiment remains strong in Moldova, even though public opinion is gradually becoming more positive towards Nato.

Given its vulnerable position on Ukraine’s western border and with part of its territory occupied by Russia-backed separatists, Moldova has been careful not to provoke Russia, especially since the invasion of Ukraine in February.

Ukraine’s commitment to joining Nato, following Nato’s 2008 promise to eventually allow Ukraine to join the military alliance, drew fierce opposition from Russia and eventually was one of the reasons for Russia’s invasion. The Russian foreign ministry demanded in December last year, at the start of the crisis that led to invasion in February, that the promise be rescinded.

Popescu’s cautious rhetoric seems to avoid touching this delicate issue. “Neutrality does not mean we wouldn’t defend [ourselves], if attacked [by Russia],” he said, which is the most powerful statement any pro-EU Moldovan official has made on the issue.

The moderate message delivered by Popescu contrasts the much bolder statements of Nato deputy secretary general Mircea Geoana, who spoke about the “reinterpretation of Moldova;’s neutrality”.

“A new stage is coming in the relations between the Republic of Moldova and Nato,” Geoana announced.

He explained that the Moldovan foreign minister attending the Nato meeting in Bucharest could represent "the beginning of a reinterpretation of what neutrality means for the Republic of Moldova".

COMMENT: The new Cold War will be different, and not only because of China
INTERVIEW: Helen Rodwell, head of CMS’ corporate practice in CEE
RBI's 2022 profits soar to €3.6bn, with Russian operations representing more than half