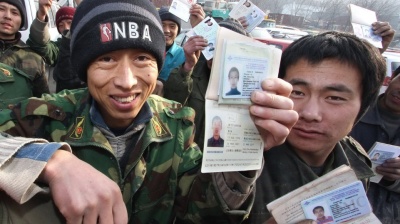 The influx of migrants to Russia in 2018 fell to its lowest level since the collapse of the Soviet Union in 1991, according to the Institute of Social Analysis and Forecasting at RANEPA in a report released on April 9, as cited by Vedomosti.

In 2018, a total of 124,900 foreigners arrived in Russia, while in each quarter, except the first, the inflow was just under half as high as a year earlier, ISAF said.

Thanks to the visa-free entry and lack of need for work permits citizens of the other former Soviet republics enjoy, Russia has long been the destination of choice for migrant workers as wages are several times higher and most migrants already have networks of friends and relations in Russia to smooth entry. But as incomes stagnate and citizens of countries like Ukraine gain access to the EU, the numbers of migrants to Russia have fallen sharply in recent years.

The total number of people who arrived in Russia in 2018 decreased by 4% compared with 2017, while those who left the country increased by 16.9%. The specifics of migrant registration in Russia also play a role, warns Nikita Mkrtchyan, a leading researcher at ISAF. As soon as registration at a migrant’s place of residence expires, he or she is considered “retired”.

Fewer migrants came from almost all countries except Azerbaijan, Armenia and Turkmenistan, but with these the migration increase grew only slightly. Hardest hit of all has been the influx of people from Ukraine and from Uzbekistan, which in the past were the largest sources of migration.

The temporary influx of migrants from Ukraine after the events of 2014-2015 supported migration growth to Russia in 2014-2015, and partly in 2016, says Mkrtchyan, but without the “Ukrainian factor” migration would have been falling already in 2014. There are some 3mn Ukrainians living in Russia, by far the largest expat Ukrainian community, but in recent years most emigrants from Ukraine have chosen to go to Poland, where there are now 2mn expat Ukrainians.

Whether the migration inflow from Ukraine will continue to decline further will depend, among other things, on the effectiveness of changes in Russian legislation on citizenship, which impose preferences for people from Ukraine, experts say. Russia has eased the rules for Ukrainians as a political snub to Kyiv.

In 2019, migration may slightly increase, but the total number of migrants will still be under 200,000 people, says Mkrtchyan.

Rosstat's forecast is more optimistic: the service anticipates a gradual increase in migration growth from 208,000 people in 2019 to 281,600 in 2035. However, this influx will not compensate for the natural population decline Russia is now facing as the demographic dip from the fall in life expectancy in the 90s starts to work its way through.

Serbia's population continues to decline
12 hours ago
June PMI shows Turkish manufacturing sinking further into contraction territory
1 day ago
Russia’s manufacturing PMI in the black in June as the sanction shock starts to wear off
1 day ago
Russian economy stable in May, but demand and income contraction deep
2 days ago
CEE Economic Sentiment Indicators fall on polycrisis woes
2 days ago