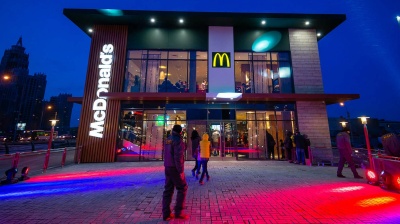 The story of McDonald's appears to be over for the forseeable future in Kazakhstan. / mcdonalds.kz
By bne IntelIiNews January 5, 2023

McDonald’s Corp is set to abandon Kazakhstan because disruptions triggered by Russia’s invasion of Ukraine have led to the Kazakh McDonald’s franchisee unable to use Russian meat supplies or source alternative supplies, Bloomberg has reported, citing anonymous sources.

As previously reported by bne IntelliNews, Food Solutions KZ, the Kazakh licensee company, said on November 18 that it would halt operations in the country of 20mn due to “local supply issues”. McDonald’s banned its local franchisee from buying meat patties from its Russian suppliers, people familiar with the matter told Bloomberg  . The company announced in December that it was working on restarting the operations of its 24 restaurants by working out supply deals with local producers.

It appears, however, that the Kazakh business was ultimately unable to source meat patties from viable local or European suppliers. Higher prices and freight costs to transport supplies across the vast country of Kazakhstan would result in running business at a loss, the sources told the news agency.

The fate of McDonald’s in Kazakhstan has also been further complicated by the situation of franchisee owner Kairat Boranbayev. He was arrested in March on charges of embezzlement following the "Bloody January" riots at the start of last year. It is believed that Boranbayev, who is a relative of former president Nursultan Nazarbayev, may have been involved in the inter-elite power struggle that took place in the background of the January political unrest.

Boranbayev was also the owner of the McDonald’s franchise in Belarus, which lost its licence in 2022 over supply issues.

With the exit of McDonald’s from Kazakhstan after a six-year presence in the country, it is possible that Russia’s McDonald’s replacement franchise Vkusno i Tochka (“Tasty, Fullstop”) might take an interest in stepping in to fill the void. The Russian chain announced its intention in late 2022 to enter the Belarusian market, though Belarus is a different case to Kazakhstan in that it is, like Russia, under heavy Western sanctions, due to its support for Russia’s war in Ukraine.

McDonald’s arrived in the Soviet Union in 1990, the year before the bloc was split up. The world’s largest fast food company sold its restaurant portfolio in Russia in May. At its pre-Ukraine-invasion peak, it operated 853 restaurants in Russia. Alexander Govor, who purchased the McDonald’s outlets, reopened them under the Vkusno i Tochka brand.

Kazakhstan: Swathes of land confiscated from Nazarbayev’s brother ahead of vote
COMMENT: The new Cold War will be different, and not only because of China
Kazakh manufacturing PMI signals stable conditions in January