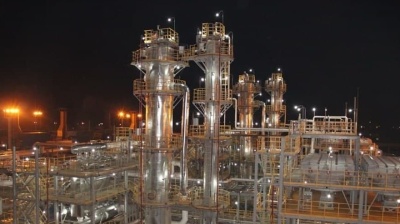 The company is investing large sums in downstream gas processing facilities with an eye on petrochemical and other markets.
By Muzaffar Ismailov in Tashkent November 8, 2021

State-owned Uzbekneftegaz (UNG), an oil and gas producer, is marketing its debut USD-denominated eurobond with a tenor of five and/or 10 years, according to preliminary deal terms unveiled by VTB Capital.

UNG to date controls around 50% of hydrocarbon deposits in Uzbekistan. In 2020, UNG accounted for 67% of Uzbekistan’s gas extraction and generated 85% of the country’s electric power, contributing 3.5% of Uzbekistan’s GDP. The company’s production (33.1bn cubic metres (bcm) of natural gas and 1.6mn tonnes of liquid hydrocarbons in 2020) has been on a downtrend in recent years, reflecting a lack of investment in exploration in the past.

Fitch and S&P rated UNG on par with Uzbekistan’s sovereign rating (i.e. at BB- with a ‘Stable’ outlook), thanks to the issuer’s strong ties with the state. Among other things, the state support for the company is reflected in state-debt guarantees, covering some 80% of the issuer’s total debt at YE20, and the practice of debt to equity swaps, which reduced UNG’s total debt by $1.7bn in 2020 to $3.3bn. Fixed gas tariffs constrain the company's financial performance.

Based on the 1H21 results, UNG generated LTM Ebitda of almost $1bn on revenues of $2.2bn. About 85-95% of the issuer’s Ebitda comes from natural gas sales, which are realised domestically (UNG does not export gas) at a low fixed tariff (USD 23/kcm), since the company fulfills a social function for the local economy. The issuer’s margin support comes from low upstream costs, sizeable production and integration into chemicals and refining.

UNG was 3.3x leveraged at the end of 1H21, while its net leverage ratio has not dropped below 3x in the past four years. Apart from heavy exploration capex, since 2019, UNG has been involved in several large-scale investment projects (for a total cost of ~$5.5bn), namely the construction of a gas-to-liquids (GTL) plant and the expansion of the Shurtan gas chemical complex (GCC), which the company is financing via new debt. These sizeable investments have led to UNG’s FCF generation being negative in recent years.

The rating agencies estimate that once completed (GTL by YE21 and GCC in 2023- 24), the projects might increase the company’s Ebitda by more than 50% and contribute to the issuer’s deleveraging. During an investor call, UNG’s management indicated the company’s net leverage ratio target of 2.5x, which it plans to achieve with new assets coming on stream.

UNG’s total debt portfolio stood at $3.6bn as of the end of 1H21, comprising of banking debt with the bulk of it denominated in USD (79%) and EUR (13%). The issuer’s average cost of debt was 3.61% as of YE20 (3.40% for the USD-denominated debt). UNG’s local debt maturity peaks in 2022 (~$1bn). According to the deal prospectus, the company intends to devote almost $0.6bn of the proceeds raised from the eurobond placement towards refinancing its current indebtedness, while the remainder is to be used for general corporate purposes (including capex financing).

In late 2020, the Uzbek government included UNG in its privatisation programme, meaning that the company’s IPO could be on the table during the next few years. The state is considering selling up to 25% of UNG. VTB said that it was not considering a partial privatisation (with the state retaining control) as a negative credit development for UNG. The potentially lower government support for the company post-IPO could weaken the issuer’s credit profile and, to a certain extent, threaten its credit ratings.

UNG’s debut eurobonds are to be issued under English Law in the RegS and 144A formats, and rank as a senior unsecured obligation of the company. Based on the preliminary deal terms, there is the possibility of a double-tranche transaction (five and 10 years), while the total size of the offering is likely to exceed $0.6bn (VTB estimates it at up to $1bn), considering the company’s declared refinancing plans for raised proceeds.

The pricing of the debut UNG eurobonds, according to VTB, is likely to go through the prism of yield levels currently formed by Uzbekistan’s sovereign curve, which appear to be the most suitable benchmark, and additionally, the so far sole outstanding corporate bond out of Uzbekistan: UZAMTS 26 (YTM 5.2%) of UzAuto Motors (another of the country’s quasi-sovereign borrowers, rated a notch lower than UNG).

“With the current yield curve positioning of Uzbekistan and the country’s QSissues, we see UNG’s 5Y tenor bond pricing within the range of 3.9 – 4.4% (mid swaps + ~275 – 325bp), which suggests a ~50-100bp yield premium relative to Uzbekistan’s sovereign curve. That is mostly in line with the spread levels to sovereign at which other CIS O&G majors are currently trading,” the investment bank concluded.

According to a resolution of the government, the eurobond listing is set to take place by the end of this month.