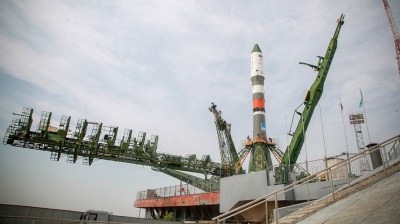 Kazakhstan's manufacturing relaunch has hit trouble. (Pictured is a rocket on the launchpad at Baikonur Cosmodrome in Kazakhstan).
By Kanat Shaku in Almaty November 3, 2020

Operating conditions across the Kazakh manufacturing sector “eased” in October following a September rebound , according to the latest Tengri Partners Kazakhstan Manufacturing Purchasing Managers’ Index (PMI). The index posted 50.8 in October, down from 52.6 in September, the PMI survey report released by IHS Markit showed on November 2. 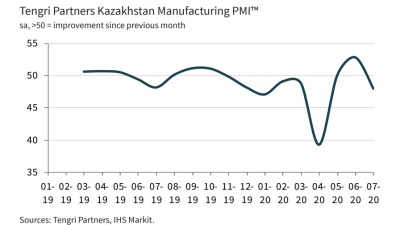 Anything above 50.0 signifies an overall expansion and anything below 50.0 represents a deterioration. The survey panellists linked the much reduced pace of improvement in October to both a near stalling of output growth and a slower expansion in order book volumes.

Anuar Ushbayev, managing partner and chief investment officer at Tengri Partners, said: "The latest PMI data highlight a notable bump in the road in the recovery of the Kazakh manufacturing sector, with the headline figure slipping back to a contraction footing and signalling a deterioration in operating conditions."

He added: "Overall, the renewed downturn is disappointing given June's record performance, and muted client demand remains the the most significant threat to the sector’s recovery."

“[...] business sentiment was the weakest since April, with panellists citing concerns surrounding the coronavirus disease 2019 (COVID-19) pandemic,” the report said.

“The seasonally adjusted Output Index shed nearly five points on the month and registered only just above the 50.0 threshold, with companies in some sectors noting that quarantine restrictions had continued to hamper factory production,” it added. 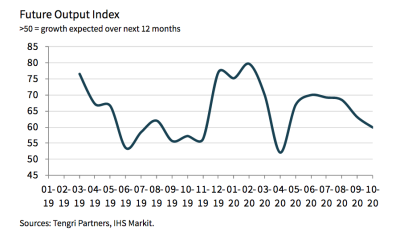 Nevertheless, new order inflows continued to rise and extended the current growth trend to three months. The latest uptick was related to an increase in the number of contracts for advance orders and improved client demand. The rate of expansion was marginal, despite easing from September.

“In line with a sustained improvement in demand conditions, Kazakh goods producers were optimistic overall with regards to their expectations for output over the year ahead,” the report noted. “Sentiment moderated to a six-month low and was heavily subdued in the context of the series history, however, with some respondents citing concerns about the longevity of the pandemic and sustainability of the economic recovery.”

Companies continued to boost their buying activity in October - the latest rise was “solid” and the quickest since June. Lead times for inputs continued to lengthen moderately, but delays remained much less severe than during the quarantine lockdowns in the spring.

The October data also highlighted a renewed dip in workforce numbers across the Kazakh manufacturing sector, though only by a marginal amount . According to anecdotal evidence, the voluntary leavers were non-replaceable. Firms continued to work through backlogs with the rate of backlog depletion mostly unchanged since September.

“On the price front, cost burdens facing Kazakh goods producers rose at the quickest rate since June and markedly overall. Panellists cited price hikes at suppliers, greater raw material costs and unfavourable exchange rates as the main drivers of inflation,” the report added. “Higher costs were partially passed through to clients in October, as average selling prices rose for the sixteenth month running and solidly overall.”

Emerging Europe strong on women’s economic opportunities but dragged down by low pensions
Copper is the new gold
ING: Oil prices at $60, now what?

Russian President Vladimir Putin’s trust rating improved by 3 percentage points to 32%, while that of jailed anti-corruption activist and opposition politician Alexei Navalny fell by one point to 4% in between December 2020 and February 2021.

Putin’s trust rating improves 3pp to 32%, Navalny falls 1pp to 4% despite protests
1 day ago
Romania’s public debt-to-GDP ratio up 12.4pp y/y to 47.7% at end-2020
2 days ago
Grey economy almost a third of GDP in Bosnia, Montenegro and Serbia
3 days ago
Belarus retail sales down by 0.9% in January
4 days ago
Consumer prices increased by 1.1% in Serbia in January
5 days ago