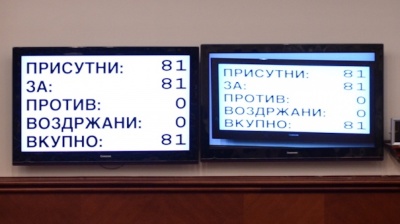 The amendments were voted in with 81 votes, with none against and no abstentions, as the opposition VMRO-DPMNE party boycotted the session.
By Valentina Dimitrievska in Skopje January 11, 2019

In a dramatic vote, the Macedonian parliament finally endorsed the constitutional changes that will see the country renamed North Macedonia on January 11. The name change agreed with neighbouring Greece will unblock Macedonia’s Nato and EU perspectives.

The vote took place following several tense days, as Social Democrat Prime Minister Zoran Zaev struggled to secure the two-thirds majority of votes in the 120-seat parliament needed for the changes to be approved.

North Macedonia will be used erga omnes, for international and domestic use, as demanded by Athens — the most contentious part of the deal for both opposition politicians and the public.

Until now, international organisations have called the country FYROM, Former Yugoslav Republic of Macedonia, due to Greece’s insistence that the name Macedonia must not be used.

The four amendments were voted in with 81 votes, with none against and no abstentions, according to a live broadcast.

The main opposition VMRO-DPMNE party boycotted the process. At the time of the vote, the party’s executive committee was holding a meeting on its next moves and decided to call for early elections in the hope of toppling Zaev’s government due to his “harmful agreement”.

Zaev's SDSM party in coalition with the ethnic Albanian Democratic Union for Integration (DUI) came to power in May 2017, and since then he has been working to improve relations with Macedonia’s neighbours and to solve the long-running dispute with Greece.

To secure the two-thirds majority in parliament, Zaev won over eight opposition MPs. MP and former minister of culture Elizabeta Kanceska-Milevska, who was expelled from the VMRO-DPMNE coalition alongside seven other lawmakers for backing the launch of the process in October, accused her former party of false patriotism.

During the parliament session, she said that VMRO-DPMNE should have involved itself in this important process for the country, rather than standing aside and shifting the blame onto others.

Zaev thanked the eight MPs for being courageous and defying their party by supporting the process.

The session ended calmly, with MPs from the majority congratulating Zaev on the successful vote.

The constitutional changes will enter into force once Greece ratifies the deal and Nato signs the accession protocol.

Hurdles on the way

The final obstacle to voting in the changes was the last-minute demand from a small ethnic Albanian party, Besa, which has two MPs whose votes were needed for the two-thirds majority to be reached.

Specifically, Besa’s leader Bilall Kasami wanted the word “Macedonian” in front of “citizen of North Macedonia” in the clause on citizenship to be removed, which was not acceptable either for Zaev or for the eight opposition MPs. However, the two sides managed to find a technical solution to specify the ethnicity of other ethnic groups in official documents.

“The citizenship will remain Macedonian/citizen of North Macedonia,” the government said in the statement, after Zaev successfully ended talks with Kasami.

During the vote, several hundred people protested in front of the parliament against the renaming of the country, chanting “Traitors”.

A 45-year-old Skopje citizen told bne IntelliNews that the deal is “extremely harmful” while its “creators should be ashamed of their hypocrisy” and all politicians responsible should be put on the “wall of shame” of the Macedonian people.

Others welcomed the agreement, which is seen as a chance for the country to exit isolation and to move forward towards a better future through its expected admission into Nato and the launch of EU membership negotiations.

“Even [though it is] a painful process, it is needed for people to have better lives, the country to be more prosperous,” an employee in the public administration from Skopje told bne IntelliNews.

She believes that once Macedonia is a member of the two international organisations, Nato and the EU will keep a watchful eye on the country, which will put an end to the chaos in the administration and criminal activity, while at the same time they will pour more money into the country.

One of the poorest countries in Europe, Macedonia has not seen much progress in recent years due to Greece’s blocking of its EU and Nato integration processes as a result of the long-standing name dispute.

Greece wanted Macedonia to change its name, as it has a province with the same name in the north gained following the Balkan wars. Once the deal is implemented, Greece pledged to strengthen relations with its northern neighbour.

During the dramatic events in Macedonia, neighbouring Greece was visited by German Chancellor Angela Merkel, a visit seen as a reminder that the Greek parliament should also ratify the name deal.

At the news conference in Athens, where Merkel stayed on January 10-11, she expressed gratitude to Greek Prime Minister Alexis Tsipras for his efforts to find a solution with Zaev regarding the name issue.

Merkel said she is convinced that the solution “will benefit Greece, North Macedonia, the stability in the Western Balkans and the European Union.”

For Tsipras, the deal is a model agreement for finding solution for other international disputes.

At home, Tsipras, who is also Greece’s foreign minister, taking the position after Nikoz Kotzias resigned following domestic pressure related to the name deal, also faces difficulties securing enough votes to ratify the deal. Namely, his coalition partner Panos Kammenos, who is against the deal, does not want the term Macedonia to remain in the country’s name.

Tsipras and Kammenos were supposed to see each other during the day, but the meeting was postponed due to developments in Skopje.

However, following the successful vote in Skopje, Kammenos, leader of the ANEL party and Greece’s defence minister, seemed to back down from a threat to quit the government before the vote in the Greek parliament, Greek daily Kathimerini wrote.

Macedonia and Greece are under pressure to finish the process by the deadlines set by Nato secretary general Jens Stoltenberg.

He said earlier he expects the Macedonian authorities to adopt the amendments by mid-January and for the whole process including the ratification by the Greek parliament to end by mid-February.

Macedonian was invited to join Nato, to become its 30th member, in July 2018 on the condition it implements the name deal with Greece.

The endorsement in the Skopje parliament will be another blow to Russia, the main opponent of Nato enlargement in the Balkans.

For their efforts to put an end to the 27-year long name dispute by signing a landmark agreement in June 2018, Zaev and Tsipras have been nominated as candidates for a Nobel peace prize for 2019.

Serbia’s president claims foreign intelligence influence in anti-government protests
3 hours ago
Famous ex-defence reporter arrested, accused of treason
19 hours ago
Turkmen President Gurbanguly Berdimuhamedov takes a holiday as WHO mission finally arrives in Ashgabat
20 hours ago
Violent clashes with police at thousands-strong anti-lockdown protest in Belgrade
1 day ago
Belarus presidential election to have no outside observers, opposition may united by a single candidate
1 day ago