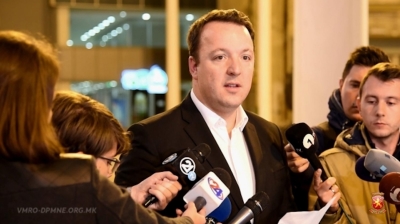 Macedonia’s parliament gave the green light late on October 19 to the constitutional changes, which include changing the country’s name to North Macedonia. The move will unblock Macedonia’s Euro-Atlantic integration, which has been stalled for many years, but it is strongly opposed by VMRO. However, eight opposition MPs voted for the changes, giving the government the needed two-thirds majority.

Several of the opposition MPs who backed the changes are accused of involvement in the parliament violence in April 2017 or of other criminal deeds. Both Mijalkov and Todorov are facing criminal charges.

The decision to expel Mijalkov and Todorov was taken at a meeting of VMRO’s central committee at a time when Macedonia’s biggest opposition party is deeply divided about its future strategy.

The leadership was angered by MPs who voted yes. But while some support current party leader Hristijan Mickoski, others, who say they are reformists, seek his dismissal. This has divided the party into several factions.

At the “historic” meeting, as the leadership says, the party decided to "clear" the party and asked municipal committees to launch disciplinary procedures to exclude Mijalkov and Todorov. They are accused of collaborating with Social Democrat Prime Minister Zoran Zaev to secure the eight opposition votes.

Furthermore, the central committee wants the eight MPs who voted for the constitutional changes to return their mandates, saying they worked contrary to the will of citizens.

“VMRO-DPMNE is putting an end to the past and is strongly moving forward as a reformed party and only with the idea of Macedonia,” the party’s deputy president Aleksandar Nikolovski said in the statement.

The eight have been accused of taking bribes. The Central Committee  called on the Public Prosecutor's Office to investigate allegations of pressures, threats, blackmail and bribery of MPs to persuade them to vote for the constitutional changes.

MPs who voted yes denied the allegations, saying they believed they were doing the right thing for the country.

Former culture minister from VMRO, Elizabeta Kanceska Milevska, who voted yes in the parliament and also faces criminal charges, said on a TV show that she is standing behind her decision that there is a need for constitutional changes and that the people should not be divided into patriots and traitors.

The governing Social Democrats reacted in a statement saying that the anti-Western leadership of VMRO, led by Hristijan Mickoski, remains isolated in its intentions to keep Macedonia away from the EU and Nato.

“Mickoski and the anti-Western leadership have been defeated by their own party, by the majority of citizens, and by MPs who voted for the future in the EU and Nato by accepting constitutional changes,” the SDSM said in the statement.

The SDSM’s general secretary Aleksandar Kiracovski urged other opposition MPs to support the process and to vote yes in the next stages of constitutional changes.

Meanwhile on October 23, the Russian foreign ministry accused the Macedonian government of using “threats and bribery” to launch the process of constitutional changes in the parliament. Russia is openly against Macedonia's accession to Nato.

“Eight votes, which were not enough to get a qualified majority, were secured by blackmail, threats and bribery of opposition deputies,” the Russian ministry said in the statement on October 22.

The ministry claimed that three opposition MPs were released from arrest, two who had been detained by special prosecutors were promised freedom, while the others were offered money in exchange for a yes vote.

“The parliamentarians were locked in offices, their mobile phones were seized. The US ambassador was in the parliament until the end of the parliament session, which leaves no doubt who orchestrated this process,” the ministry said.

According to the Russian ministry, the solution of the Macedonian-Greek dispute should be based on legal foundations and on the broad support of the people.

In the next stage of the process of implementing the name deal with Greece, the government will send the constitutional amendments to the parliament on October 26 for which they need a simple majority. The process may last one month.

Then the amendments should be finally approved in the parliament with a two-thirds majority, a process expected to be completed by the end of January.

However, the process is not expected to run smoothly as some small parties who oppose the deal have announced protests. It is not clear how deeply divided VMRO will act during the next stages of the deal implementation.

Putin signs off annexation of four Ukrainian regions
5 hours ago
Kremlin preparing for a protracted conflict by putting Russian economy onto a war footing
9 hours ago
Hungary’s forint slides to new low after central bank ends tightening cycle
12 hours ago
Slovak ministers criticise Czech border controls
12 hours ago
Might Trussonomics be a branch of Erdoganomics?
17 hours ago