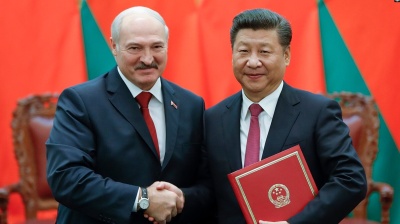 On Monday, January 10, Belarusian President Alexander Lukashenko and Chinese President Xi Jinping held a phone conversation, marking 30 years of bilateral contact between the countries and praising the development of future bilateral co-operation as well as co-operation in multilateral organisations.

Xi told Lukashenko that China is ready to use this 30-year anniversary to “enhance political mutual trust, deepen mutually beneficial co-operation and push for new results in the China-Belarus comprehensive strategic partnership. The two sides should expand the scale of bilateral trade, strengthen co-operation in areas such as innovative, green and digital development, and ensure the stable operation and sustainable development of the China-Europe Railway Express. The two sides should also continuously enhance vaccine co-operation.”

Xi stressed that Belarus and China have co-operated effectively in multilateral organisations such as the United Nations and “and firmly supported each other in safeguarding our core national interests, which has demonstrated the strategic value of China-Belarus co-operation.” The Belarusian president thanked Xi for China’s firm political and moral support to Belarus with reference to China’s support for the regime during its political crisis and increasing international isolation.

During the ceremony, Belarus First Deputy Prime Minister Nikolai Snopkov noted that the Great Stone industrial park had seen a record-high number of resident companies during 2021 despite sanctions against Belarus. Today, the park hosts 85 companies, of which 43 are Chinese and who hold a total investment of $1.2bn in the park. Over the course of 2021, a total of 21 new companies had been registered. Snopkov mentioned the MAZ-Weichai joint venture as a successful project in developing automotive components and electronics. During 2021, Belarusian and Chinese officials have mentioned future development of co-operation in pharmaceuticals by developing production of traditional Chinese medicine against the coronavirus (COVID-19) in Belarus, something mentioned by both Xi and Snopkov.

Chinese imports from Belarus today mainly consist of potash fertilisers and food products. When China began its Belt and Road Initiative (BRI), aiming to create new trade links across the globe, and especially to establish a new modern variant of the old Silk Road, Belarus was chosen as the primary partner to link Chinese-EU trade by rail and to be a springboard for Chinese products destined for the Eurasian Economic Union (EAEU). The China-Europe Railway express was established in 2011, but in 2020 only 4% of China-EU trade was conducted by rail. Moreover, Chinese production and sales from Belarus to the EAEU have been hampered by slow intra-union trade-liberalisation.

In 2021, many independent political analysts have questioned whether China would be interested in future political and economic co-operation with Belarus, considering the increasingly heavy sanctions imposed on it by Western countries. In 2015, the Chinese Development Bank agreed to provide a total of $1.4bn in credit for the construction of the Nezhinsky mining and processing plant for potash, an investment guaranteed by the Belarusian government. An important element of this is that once the plant started operating, its entire production is supposed to be transferred to China over 25 years. In August last year, China suspended the payment of the remaining $580mn for the project. Neither Minsk nor Beijing has so far commented on the suspension. The suspension is thought by some to have been made due to the fact that the owner, Russian billionaire Mikhail Gutseriev, and the Belarusian bank holding the loans, Belarusbank, came under Western sanctions. However, China has a vested interest in developing a new potash deposit in Belarus, since increased global supply would mean a cheaper purchasing price for Beijing, which is strategically important for China’s agricultural production. Some analysts therefore think it’s unlikely that China will drop the project, and instead suspect that the credit freeze was a Chinese attempt at exerting leverage over Belarus in order to drive down costs.

Currently, China is struggling with a shortage of potash fertilisers due to the limited capacity of its domestic industry, rising prices on the world market, and pandemic-related disruptions to international supply chains. According to the PRC customs office, Belarus sent a total of 1.38mn tonnes of potassium chloride to China in 2020, which accounted for 16% of total Chinese potassium chloride imports. Due to the Lithuanian governments announcement yesterday, that it will suspend transportation of products from Belarus potash giant Belaruskali through Lithuanian ports, Chinese-Belarusian trade is threated. What’s more, a sudden disruption of this trade flow threatens Chinese food security, something which should be unacceptable to the Chinese leadership. Belarusian potash exports will most likely soon see a redirection of exports through either Russia or, which at the current border situation and over all heightened political tensions with Ukraine appears unlikely, through Ukrainian ports.