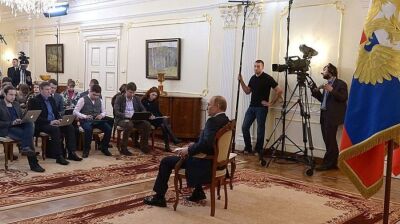 The Kremlin is struggling to control media coverage of what it still refers to as a "special military operation". / Russian Presidential Press Office.
By bne IntelIiNews October 12, 2022

Media outlets confronted by the long arm of Roskomnadzor have apparently been threatened with the blocking of the news output they make available in Russia should they not comply with censorship demands. The news provision is primarily aimed at the millions of Central Asians who live in Russia, often as labour migrants.

Roskomnadzor (Russian Federal Service for Supervision of Communications, Information Technology and Mass Media) has from the start of the conflict in Ukraine been in the business of preventing audiences in Russia from accessing material that doesn't support the Kremlin's official Ukraine war narrative.

In recent years, prior to the war, Roskomnadzor has sent a range of content removal demands to media outlets in Kazakhstan, Kyrgyzstan and also Tajikistan — sovereign countries that, despite having their own problems with media freedom, all now rank higher than Russia on the Reporters Without Borders Press Freedom Index.

In Roskomnadvor’s attemped crackdown on Ukraine war articles, Kazakh news server Exclusive.kz was reportedly warned that it was violating Russian media laws. The site was removed from Google in Russia for reprinting a report about Russian and Ukrainian casualties.

On August 10, Roskomnadzor asked the outlet Ratel.kz to take down an article that discussed how support for Russia's war against Ukraine was declining among young people. In March, Ratel.kz and government-owned newspaper Kazakhstanskaya Pravda were attacked by hackers. The website homepages of both media outlets were filled with pictures of the Russian flag and the letter symbols “Z” and “V” used by pro-Ukraine war Russians.

In June, websites with similar URLs to popular Kazakh news outlets began appearing online. The articles placed on the sites highlighted the “brotherly” relations between Russia and Kazakhstan.

The editor-in-chief of the outlet Mediazona said she thought the block applied to Kloop was a response to it using the word "war" rather than "special military operation" to refer to Russia's full-scale invasion of Ukraine.

There is no formal agreement between the Kazakh and Russian governments permitting them to interfere in the work of journalists in each other's countries. However, Moscow and Astana are parties to an agreement on "media cooperation", the purpose of which is to guarantee that each country has free and equal access to information published in the other country.