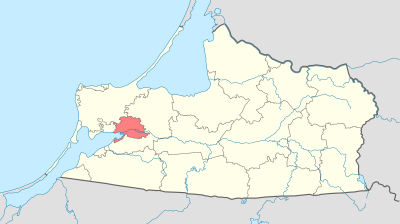 The issue is so sensitive to Moscow because of Kaliningrad’s potential vulnerability, given that it is separated by Lithuania and then Belarus from the rest of Russia.
By Linas Jegelevicius in Vilnius June 23, 2022

Lithuania is bracing itself for Russia’s response to its imposition of EU sanctions on the transit trade between Russia and its exclave of Kaliningrad, which is tucked between Lithuania and Poland on the Baltic coast.

Moscow regards the ban on the transport of certain goods – notably steel and ferrous metal products – between parts of its territory as a violation of a 2002 agreement with the EU; Vilnius and Brussels say Lithuania was just implementing the bloc’s sanctions when it began imposing the restrictions on June 18. The sanctions are seen as superseding any prior agreement, particularly given that they have been imposed because Moscow is conducting an illegal war against Ukraine.

Russian presidential spokesman Dmitry Peskov said on June 21 that Lithuania's decision was "unprecedented" and "in violation of everything there is".

The spokeswoman for the Russian Foreign Ministry, Maria Zakharova, warned on June 22 that Russia’s response over the Kaliningrad sanctions “will not be diplomatic”.

The EU summit in Brussels that begins on June 23 is expected to discuss Moscow’s threats and re-affirm its backing for Lithuania. Nato leaders are also likely to discuss the issue at their meeting next week.

The United States said on June 21 it stood firmly behind Lithuania and its Nato commitments to defend it. “We stand by our Nato allies and we stand by Lithuania,” State Department spokesman Ned Price told reporters.

It is still unclear what retaliation Moscow is planning but security analysts argue it is extremely doubtful it would be a full-scale military response – for example a military thrust into the Suwalki Gap, a narrow 70-km long stretch of land connecting Kaliningrad and Belarus that would cut the Baltic states from the rest of the Nato alliance.

Such an attack would mean Lithuania could call on Nato help, under the defence pact’s Article 5, and could involve the approximately 1,000 Nato troops (mostly German) already stationed in the country. Lithuania has repeatedly asked for more Nato troops to be stationed permanently on its territory to make the deployment more of a deterrent than just a tripwire in crises such as the current one.

“I think everything will boil down to a prolonged spat, but the Kremlin will not start throwing punches. It is too busy in Ukraine and Nato would very likely to defend ‘every inch’ of Lithuania – something it has promised,” Vytautas Dumbliauskas, associate professor of Vilnius-based Mykolas Romeris University, told bne IntelliNews.

An alternative retaliation would be to cut Lithuania from the regional power grid, something that the country has prepared for, Lithuanian President Gitanas Nauseda told Reuters.

"We are ready and we are prepared for unfriendly actions from Russia (in response), such as disconnection from the BRELL system, or others," he said on June 22.

Lithuania installed equipment on its power link to Poland last year to connect with the continental European grid quickly as an insurance policy.

The issue is so sensitive to Moscow because of Kaliningrad’s potential vulnerability, given that it is separated by Lithuania and then Belarus from the rest of Russia. The exposure of the territory – seized by Stalin as a prize at the end of the Second World War – did not matter when the surrounding states were all members of the Warsaw Pact military organisation but now it is surrounded by Nato members. Russia has consequently made the territory a significant military base and is believed to have stationed nuclear missiles there.

In the early 2000s, with Lithuania moving toward the EU and Nato, Brussels reached a deal with Moscow on the transit of passengers and freight. The Kremlin had previously attempted to put pressure on Lithuania into agreeing to a military corridor or a continued Russian troop presence, something that would have stymied Vilnius’ Nato aspirations.

The simplified transit mechanism started operating on 1 July, 2003, less than a year before Lithuania joined the EU on 1 May, 2004. Around a hundred trains used to enter Lithuania from Belarus each month and continue via Vilnius onward to Kaliningrad.

Lithuanian President Gitanas Nauseda's spokespeople insisted on June 21 that transit to the Kaliningrad region via Lithuania has not been suspended or blocked. “Lithuania has not imposed any unilateral restrictions on this transit,” his office said.

The Lithuanian foreign ministry on June 20 handed a diplomatic note to Sergey Ryabokon, Moscow's charge d'affaires ad interim in Vilnius, explaining that passengers and goods not subject to the EU sanctions regime continue to be transported through the territory of Lithuania to and from Kaliningrad.

According to preliminary estimates by the authorities of the Kaliningrad region, approximately 40%-50% of transit cargoes were banned. This includes building materials, cement, metals, a number of other goods important for construction and production, and finished products from Kaliningrad.

Yet some experts believe that the list of goods whose transit is prohibited may be wider than the authorities say. It is possible that restrictions will affect the supply of caviar, alcohol, fertilisers, timber, glass containers, said Ivan Timofeev, director of the Russian Council on International Affairs.

Josep Borrell, EU High Representative for Foreign Affairs and Security Policy, has tried to defuse the dispute by saying that the EU will double-check to see if the list of prohibited goods is being applied correctly. According to media reports, some EU officials believe the sanctions should not affect goods that are only moving between the two parts of Russia.

The Kaliningrad authorities believe that there was “a mistake” and the ban will soon be lifted, assuring residents that there will be no shortage of consumer goods.

But for now they are going to deliver goods by sea, which will not only take longer, but is more expensive. This will also require a redeployment of vessels to the Ust-Luga (Leningrad region) – Baltiysk (Kaliningrad region) line.

Lithuania’s stance has drawn some domestic criticism, given that the issue has blown up without any warning. To critics, the ruling centre-right government has once again embroiled tiny Lithuania in a conflict with a superpower. Relations between Vilnius and Beijing have all but broken down over Lithuania’s close ties with Taiwan.

Lithuania’s European Commissioner Virginijus Sinkevicius says Lithuania “failed to properly prepare its strategic communications” to respond to Russia’s threats over the restriction of sanctioned goods’ transit to Kaliningrad. “I have no doubt that they [Russia] had prepared the narrative of what they would do in advance, that they would spread panic here,” he told reporters in Brussels on June 21.

“The aggressor [against Ukraine] is well known, but I just hope that in this case it will show more sanity than Lithuania’s two most pugnacious politicians ever – Foreign Minister [Gabrielius Landsbergis] and Prime Minister [Ingrida Simonyte], who, I am suspecting along with many others, are acting like puppets of some big players behind the scenes, ones obsessed with trying out the Article 5,” Dainius Kepenis, a Lithuanian opposition MP, told bne IntelliNews.

“It will be us first of all, not the allies who would perish if the conflict spirals out of control,” he warned.