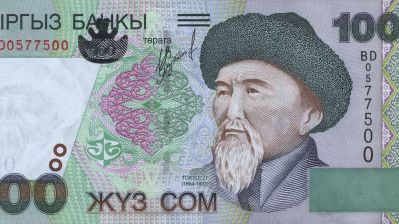 Kyrgyzstan’s National Bank resorted to big interventions in the currency market in late November to halt the rapid depreciation of the som, which lost 8% of its value against the dollar in November alone. Observers explain the pace of devaluation by the end of a political cycle in the country, which elected a new parliament on October 4 and appointed a new government on November 5.

In order to slow down the pace of devaluation the bank spent about $70mn on currency interventions in one month, bringing the annual total to over $250mn this year so far. As a result, the National Bank’s foreign exchange reserves fell from $1.9bn at the end of October to $1.7bn as at November 26. The som devalued by 28.94% against the dollar between January and November, losing 22.8% of its value. Bureaux de change sold dollars for KGS75.7-76 in Bishkek on December 1, although the official rate set by the National Bank is KGS75.8648 to the dollar.

Bakhtiyar Bakasuulu, financial analyst and assistant professor at the Bishkek-based Kyrgyz Economic University, explains the “practically daily” devaluation of the national currency by the economic and political situation in the country. “The sharp increase in the exchange rate was caused by the end of the political cycle in the country during which the government propped up the exchange rate in September ahead of the parliamentary election,” the analyst explains to bne IntelliNews. “This is also a result of Kyrgyzstan’s membership of the Eurasian Economic Union.”

Kyrgyzstan joined the Moscow-led free-trade bloc of Belarus, Kazakhstan, Russia and Armenia in August and its membership imposed restrictions on its trade with countries outside the bloc. “As a result of joining the union, Kyrgyzstan has lost the main source of its revenue which is re-exports of Chinese goods” to Kazakhstan and Russia, Bakasuulu says. Central Asia’s largest markets – Dordoi in Bishkek and Kara-Suu on the border with Uzbekistan – have taken a blow and are now “in full stagnation”. The slowdown in the country’s main trading partners – Russia, China and Kazakhstan – is also affecting economic activity in the country through a fall in investment and remittances.

The Kyrgyz foreign exchange market was most volatile during the last week of November when some exchange booths temporarily stopped selling cash dollars when the cash exchange rate reached KGS77 to the dollar. Similarly, some commercial banks limited sales of dollars to $200 per person. This sowed a “negative, and often panicked, mood among the population which started en masse to convert their savings to dollars”, the analyst says.

In response to the dollarisation of savings, which reached 60% of total deposits, the Kyrgyz central bank intends to reduce interest rates on dollar-denominated deposits to discourage the population to keep savings in foreign currency. Despite the high level of dollar-denominated deposits, commercial banks are hardly issuing credit in dollars, National Bank Governor Tolkunbek Abdygulov complained to a parliamentary committee for economic and fiscal policy on November 24.

Nevertheless, another “dedollarisation” measure the central bank is suggesting is to ban commercial banks and credit unions from issuing mortgages and consumer loans in dollars to retail borrowers “given the credit risk caused by the currency risk as a result of a negative change in the exchange rate for the borrower”.

However, this will practically be impossible to implement because the country is pursuing the “open economy” policy, Bakasuulu believes. “A ban on credit in foreign currency could only be imposed in the condition of currency controls by the state,” the analyst says. “In the conditions of Kyrgyzstan’s open economy, the ban will drive these operations into the shade and create a shadow currency market, which will further complicate the situation and lead to a further drop in the som’s value.”

The Kyrgyz professor believes since the “deeper problems” in the country’s economy, the central bank and the government will not be able to maintain the exchange rate at the current level and the som is expected to fall below the 80 mark by the New Year. “After the New Year the situation will directly depend on the economic situation in Russia and Kazakhstan, the economies of which will suffer if the price of oil falls to $20-30 per barrel,” Bakasuulu concludes.

Kyrgyzstan: Eccentric health minister fights for his job amid claims of corruption and bullying
13 hours ago
Azov commanders have remained behind in the Mariupol steelworks to continue the fight
14 hours ago
Russia hopes Chinese carmakers will help revive Moskvitch brand
15 hours ago
Russia may leave the WTO and WHO. In practice, it never really joined
15 hours ago
UN special rapporteur issues damning indictment on human cost of sanctions in Iran
20 hours ago