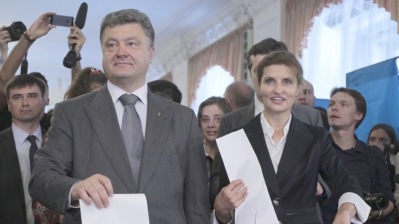 President Petro Poroshenko is seeking re-election in March, but he faces an uphill battle as the economy is growing at a rate well below potential. / wiki.
By Ben Aris in Berlin January 25, 2019

A small diplomatic scandal broke out in Ukraine this week after the International Monetary Fund (IMF) ticked off Ukraine over the slow pace of reforms in its first assessment of the year, only to pull the embarrassing statement a few hours later.

With presidential elections only a few months away, the administration of President Petro Poroshenko is hyper-sensitive to criticism and the IMF probably felt that it inadvertently trod on some political toes.

The key paragraph in the report that went out under the name of IMF managing director Christine Lagarde included: “I reiterated that the IMF stands ready to continue to support Ukraine, along with other international partners, in its reform efforts under President Poroshenko’s leadership. I also highlighted the urgency for Ukraine to accelerate reforms and transition to stronger growth, which is needed to improve people’s living standards in a sustainable manner.”

On the mend
Ukraine’s economy is on the mend and grew by 3.5% in 2018. However, it is growing from a very low base. The World Bank named Ukraine as “Europe’s poorest country” in 2018 and the lack of reform is weighing on growth. The IMF recently downgraded the country’s economic growth outlook for 2019 to 2.9%. So Ukraine’s economy is currently growing, but way below potential.

Although the admonishment was fairly tame, Poroshenko’s main opponent opposition leader Yulia Tymoshenko has already made criticism of the harsh measures imposed by the IMF on the government, which have made the ordinary person’s life harder, a central pillar of her campaigning for several years now. The criticism of Poroshenko by Lagarde is simply more ammunition for Tymoshenko and could wound his already struggling bid to get re-elected on March 31.

Comedian’s Russia holdings
Just how close the race is has become confused in the last few days. At the start of the year, Tymoshenko was in a clear lead with circa 21% of those that said they were going to vote plumping for her. That put her about 7 points ahead of comedian Volodymyr Zelenskiy in second place and 10 points in front of Poroshenko. However, an investigation released in the last week accused Zelenskiy of still earning money from holdings in Russia, which he previously claimed he gave up following the annexation of Crimea in 2014. That will hurt his standing.

Another poll released this week puts Poroshenko neck-and-neck with Tymoshenko, both with 17%. The problem is that the pollster that came out with these results, BAML, is an unknown quantity.

“I talked to people in Ukraine and no one has ever heard of them,” Tim Ash, senior emerging markets sovereign strategist at BlueBay Asset Management, told bne IntelliNews.

Polls in Ukraine are notoriously inaccurate, however, analysts at Concorde Capital warned in September that some of the candidates could simply invent poll results to confuse the voters and improve their chances.

Specifically, the deputy director of the Kyiv International Institute of Sociology (KIIS), Anton Hrushevsky, one of the best respected pollsters, pointed out that polls would be used to skew the results and make direct comparisons harder.

Crucial to chip away
Zenon Zawada, an analyst with Concorde Capital, argued that it is crucial for Poroshenko to chip away at Tymoshenko’s lead as the most likely rival in what will be the almost inevitable second round to the presidential election.

“That way, if Tymoshenko alleges vote fraud, Poroshenko will be able to claim that her small lead in the polls ahead of the elections doesn’t back up her claims. And that would reduce the public’s willingness to engage in mass protests,” Zawada said in a note.

In an underreported development last year, Poroshenko added members to the Constitutional Court, stacking it with more of his own supporters. If it comes down to a fight over the veracity of the election results after the March election, the Constitutional Court will play a crucial role as it was this court that broke the deadlock following the 2004 elections that saw Viktor Yushchenko eventually triumph over Viktor Yanukovych in a rigged election that led to the Orange Revolution.

Because of the games played with polls, Zawada advised clients to take any poll result from any pollster other than the big three and well established pollsters with a big pinch of salt.

“We believe it’s possible that the Poroshenko campaign is paying for polls to skew the questions and results against Tymoshenko. The polls conducted by the Kucheriv Fund/Razumkov centre, the Kyiv International Institute of Sociology and the International Republican Institute are considered to be most reliable,” Zawada said in a note in September.