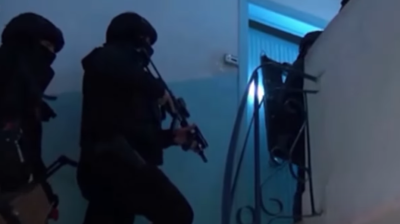 Turkish police released video footage of an early morning raid during which the suspected bomber was seized from an apartment. / Screengrab.
By bne IntelIiNews November 15, 2022

The armed wing of the Kurdistan Workers’ Party (PKK) has denied any involvement in the weekend bomb attack on main Istanbul shopping street Istiklal Avenue.

Following the November 13 blast that took six lives and injured 81, Turkish officials were quick to blame Kurdish militants for the deadly explosion, timed for when the boulevard would be most crowded on a Sunday afternoon.

After Turkish President Recep Tayyip Erdogan said that “the smell of terror” was in the air, Turkish interior minister Suleyman Soylu went on to state that the attack was planned in a Kurdish-majority city in northern Syria and blamed militants from the outlawed PKK and the People’s Defence Units (YPG).

“We have nothing to do with this incident and it is well known by the public that we would not target civilians directly or approve of actions directed at civilians,” the PKK said in a statement attributed to the headquarters command of the People’s Defence Centre (HSM). HSM is the armed wing of the group, designated as terrorist by Turkey, the US and the EU.

In early October, anticipating violence ahead of Turkey’s parliamentary and presidential elections scheduled for next June, bne IntelliNews reported on a suicide attack claimed by the People’s Defence Forces (HPG), a unit of the HSM and PKK, in Turkey’s Mediterranean city of Mersin, under the headline “Suicide attack in Turkey awakens ghosts that promise violence ahead of elections.” The article described how previous election seasons in Turkey have been marked by bomb attacks. Such bombing campaigns usually harden the electorate to the right in support of “security candidates”.

Events moved quickly after the explosion. Turkey’s justice minister, Bekir Bozdag, talked of “a woman [who] sat on a bench there [where the explosion occurred] for 45 minutes”, and that the blast, thought to be from a parcel bomb, happened moments after she left. Turkish officials then named a Syrian national, Ahlam Albashir, as the primary suspect in the attack. Turkish state-run news agency Anadolu Agency subsequently featured video footage and images of an early-morning November 14 raid on Albashir’s residence and her detention. The Istanbul police department announced that 46 people had been detained in a series of early-morning raids.

Albashir, the Istanbul police said, “declared that she was trained by the PYD [Democratic Union party]/YPG terrorist organisation as a special intelligence officer”. The suspect entered Turkey via Afrin, a city near Aleppo that has been under Turkish control since 2018, they added.

The YPG, part of the Syrian Democratic Forces, remains problematic in Turkey-US relations in that it played a vital role as a US ally in the US-led campaign to bring down the Islamic State caliphate that was declared in northern Syria.

The YPG also issued a statement, denying any role in the Istanbul attack. “We categorically deny any link to Ahlam al-Bashir, the perpetrator of the terrorist attack,” said a spokesperson, Nouri Mahmoud.

Soylu visited the site of the blast in the hours immediately after it occurred. He specifically claimed the attack was commissioned by Kurdish separatist groups in northern Syria, pointing to the town of Kobani (also known as Ayn al-Arab), a Kurdish-majority city on the Syrian-Turkish border.

“Our assessment is that the order for the deadly terror attack came from Ayn al-Arab in northern Syria, where the PKK/YPG has its Syrian headquarters,” Soylu said.

Soylu also reiterated Ankara’s unhappiness at enduring US support for the YPD. “I emphasise once again: We do not accept the American embassy’s condolences, we reject it,” he said, adding: “We will respond heavily to this attack.”

The bombing came with Nato member Turkey sticking to its line that Sweden and Finland must show full cooperation in efforts at combatting the PKK and Kurdish militants before Ankara can accept their bids to join the military alliance. Both Nordic countries have repeatedly condemned terrorism and said they do not support the Kurdish groups, but Turkey, particularly with regards to Sweden, is pursuing the extradition of Kurdish individuals as part of its demands.

“The international community should know that terrorist attacks against our civilians are the direct and indirect consequences of some countries’ support for terrorist organisations,” Fahrettin Altun, communications director of President Erdogan said on November 14.