Kosovo slaps 100% tariffs on imports from Serbia and Bosnia 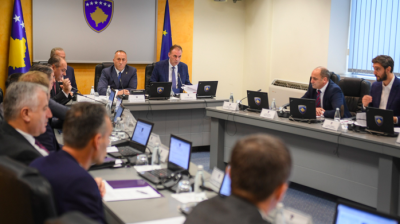 The Kosovan government decided on November 21 to increase its customs tariffs on products from Serbia and Bosnia to 100%, in a politically motivated move that has hiked tensions in the region.

The move is expected to infuriate further the Serbian and Bosnian authorities as their exports to Kosovo have already almost halved due to Pristina's previous protective measure of imposing 10% import tariffs taken on November 6.

The new decision came one day after Kosovo’s bid to join Interpol failed due to the increased Serbian pressure on member countries to vote against Kosovo membership.

“Import of products labeled "Kosovo and Metohija", "Kosovo 1244" and "Kosovo UNMIK" in declarations of imported goods will be also forbidden,” the government in Pristina said in the statement.

“Today #Kosovo imposed a measure of a 100% on imported products with origin from #Serbia & #BiH, exempting international brands. #Kosovo will also block all products that do not refer to #Kosovo’s official constitutional name in its label,” tweeted Prime Minister Ramush Haradinaj after the government meeting.

Recently, Serbia and Bosnia & Herzegovina urged the European Commission (EC) to exert stronger pressure on Kosovo to withdraw its previous decision to impose 10% import tariffs on products from the two countries.

However, President Aleksandar Vucic said late on November 21 that a decision had been made at a session of the National Security Council that no countermeasures will be taken.

“We will not stop their trucks, passenger cars, or goods traffic to Kosovo and Metohija,” the Serbian president said, according to a government statement.

“Pristina's decision is neither rational nor reasonable. Accordingly, we have concern, but also a partial fear, because we care for peace. We will have to take a variety of measures to make the world aware of what Pristina does, but also to see how to help our people.”

The Serbian government plans to work together with the Serbian Chamber of Commerce and exporting companies, which include international companies such as Henkel and Coca Cola, to overcome the crisis, Vucic said.

Kosovan government says that the CEFTA agreement in Kosovo-Serbia trade relations has been continuously violated by the Serbian side since it was signed.

On November 7, the European Union sought urgent clarification from Kosovo on its decision to impose the 10% increase on import tax, but this yielded no results.

Hungarian government declares another state of emergency
22 hours ago
Russian bond defaults could soar after US lets payment exemption expire
22 hours ago
Lira drags Turkey further down road to hell
1 day ago
No progress in talks between Bulgaria, North Macedonia on lifting veto on EU accession talks
1 day ago
Former Moldovan president Dodon detained in treason and corruption case
1 day ago