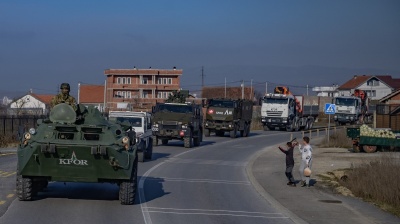 KFOR increased its presence in Jarinje amid heightened tensions in north Kosovo. / KFOR
By Valentina Dimitrievska in Skopje December 31, 2022

Kosovo Serbs, who have been blocking roads for 20 days, started to remove barricades in northern Kosovo on December 29 after the US and EU exerted pressure on the authorities to de-escalate the situation.

This follows an appeal by Serbian President Aleksandar Vucic to Serbs in Kosovo to remove the barricades as he got strong assurances from the US and EU that the demands of Kosovo Serbs will be met.

The situation in Kosovo has been tense for months, but escalated to the verge of conflict when Kosovo authorities arrested an ethnic Serb former police officer for participating in a violent protest. The root of the latest turmoil in Kosovo was Pristina’s request for Serbs there to change their Serbian car number plates with Kosovan ones. Serbs in Kosovo sees Serbia as their motherland, even though Kosovo declared independence from Serbia in 2008 following the bloody war in 1998-99.

The first barricade which was removed was at the Merdare border crossing point and the traffic there was re-established. According to Serbian media reports, during the night two trucks, which Serbs placed as a barricade at a bridge near Dudin krs, were set on fire.

The UN mission in Kosovo, UNMIK, welcomed the measures to calm tensions in the north of Kosovo, including removing barricades

Head of UNMIK Caroline Ziadeh acknowledged the “painstaking efforts” of all involved parties, including the US and the EU, to guarantee the safety of all communities in Kosovo.

In the meantime, former police officer Dejan Pantic, who was accused of terrorism for participating in unrest earlier this month, was released from prison by a Kosovan court and put under house arrest. He was arrested for assaulting a police officer during a protest. Kosovo's PM Albin Kurti was angered by the court decision.

Head of the Serbian office for Kosovo, Petar Petkovic, said on December 28 that another guarantee from the US and EU is their confirmation that there are no arrest or prosecution lists for Serbs who participated in previous peaceful protests or the protests at the barricades.

On December 26, Vucic put the army on highest alert amid the tensions on the border.

The removal of the barricades now is seen as a sign of de-escalation of tensions at least temporarily.