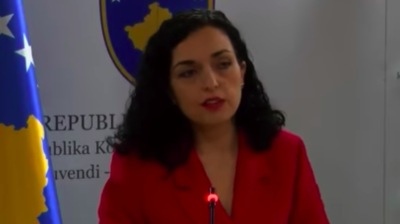 Kosovo’s leaders have signed the application for the EU membership on December 14, a move opposed by neighboring Serbia, of which Kosovo officially was part until 2008.

The application is expected to be filed on December 15 to the Czech EU Presidency, just days EU general affairs ministers decided to approve candidate status for Bosnia & Herzegovina. However, five EU member states do not recognise Kosovo as independent.

The document was signed by Kosovo’s President Vjosa Osmani, Prime Minister Albin Kurti and speaker of the parliament Glauk Konjufca.

According to Osmani, this is an historic day for Kosovo.

“December 14 has a double importance in the modern history of our Kosovo. On the one hand, we are applying for EU membership, and on the other hand, we are celebrating the anniversary of the founding of our army. Both acts are directed towards the realisation of our Euro-Atlantic vision,” Osmani said.

Kosovo is not a member of the UN or Nato.

Kosovo, predominantly inhabited by Kosovan Albanians, declared independence from Serbia in 2008 following a bloody conflict in 1998-99, but Serbian officials clearly stated they don’t intend to recognise it as a separate state. In line with this policy, Serbia is opposing Kosovo’s bids to join international organizations.

The application comes at a time of high tensions between Belgrade and Pristina ahead of extraordinary elections initially scheduled for December 18 to fill vacant posts after Serbs in northern Kosovo decided to abandon the state institutions in protest against the authorities’ insistence on continuing with re-registration of cars with Serbian number plates.