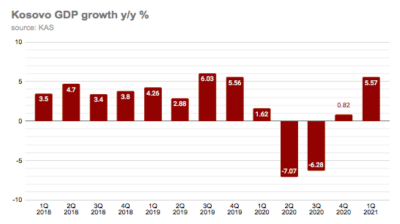 Kosovo's Minister of Economy Artane Rizvanolli said that GDP growth this year could be even higher than the projection of 7.9% included in the pending budget revision, possibly reaching 10%, local media reported on July 25.

Kosovo’s government endorsed the first budget revision this year in June that includes measures against COVID-19 and the vaccination process. The budget revision was endorsed in principle by parliament earlier this month and is awaiting final approval. The country posted strong GDP growth of 5.57% in the first quarter of 2021.

According to Rizvanolli, the higher growth can be expected as budget revenues, business turnover, exports, imports and consumption are much higher than expected.

"I am pleased to say that the projection of economic growth of 7.9% by the Ministry of Finance has been increased further in the meantime. We now expect economic growth to reach 10% this year. This projection may change over time” Rizvanolli was cited as saying by Info-ks.net.

“All indicators we have so far show that the economic recovery will be much faster than expected for 2021," Rizvanolli said.

However, economists estimate that there is no chance for the country to reach such high GDP growth unless there are large investments.

The executive director of the American Chamber of Commerce, Arian Zeka, was quoted as saying that the government’s GDP projection can be achieved by encouraging economic activities and foreign investments.

Zeka pointed out that concrete actions from the government are needed for continuous support to companies that have suffered damage due to the coronavirus pandemic.

The International Monetary Fund (IMF) said recently it expects Kosovo economy to expand by about 5-6% in 2020 depending on the ambitious vaccine rollout programme, and the reopening of borders which hails strong diaspora summer travel.