Kings Meat brings home the US bacon to Moscow 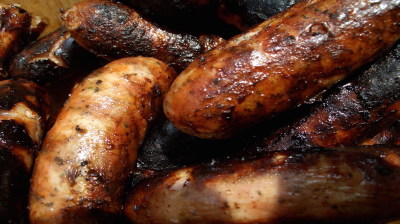 Russian-made bangers compete with the best of the rest of the world.
By Jason Corcoran in Moscow May 4, 2016

Kings Meat is helping to stock supermarket shelves in a city starved of quality bacon and deli meat since sanctions were imposed against Western foodstuffs two years ago.

The Moscow meat producer, which was known as Warren’s Sausages until 2012, started providing the supermarket chain Azbuka Vkusa’s 90 stores in March with both American and cold smoked bacon.

Kings is part of quiet revolution in food sourcing in Moscow that has accelerated since sanctions were introduced. Russia, the world’s ninth-biggest food importer in 2013, last year slashed its overseas food purchases by 40% to $26.5bn. President Vladimir Putin has urged a drive to increase food security, saying Russia’s huge tracts of farmland “make us the richest country” in agriculture. The industry has responded and most of the best steak restaurants in Moscow are now supplied with Black Angus beef from Voronezh, in south-western Russia. Even specialist cheesemakers have stepped up and are selling their wares in Moscow stores.

“We are very much in favour of sanctions because it gives us a competitive advantage,” Joel Babb, owner of Kings Meat, tells bne IntelliNews in an interview. “This blockade against foreign food is allowing us and others to develop the consumer mentality that produce made in Russia can be of a very high quality.”

The major supermarkets are actively seeking reliable local suppliers, but progress is incremental and will need to be sustained. While Russia is self-sufficient for some meat, it doesn’t yet produce enough dairy, fruits or vegetables.

A report by Alfa Bank in April also indicates that the import substitution drive has so far only yielded a smaller selection of more expensive products. “We and most other observers had looked forward to the publication of the structure of 2015 GDP by production by Rosstat in order to see whether import substitution had happened last year," Alfa Bank's influential chief economist Natalia Orlova wrote. "Unfortunately, the answer was 'no'."

Prior to the food sanctions, Kings sourced much of its meat overseas from Ireland and further afield. Decent chicken could be sourced locally, but not pork nor beef. After sanctions prohibited the import of meat from the EU and US, the company was initially forced to buy an inferior quality of meat from Argentina at higher prices. Today, all of the meat used in Kings’ products is sourced from Russia.

Kings’ bacon, which can be ordered from its website for RUB412 ($6.20), is still very much a premium product for ordinary Rusians, as are the firm’s sausages and hamburgers.

The company was originally set up by entrepreneur John Warren in 2004 to make English sausages using only natural ingredients for mainly Moscow’s expat community.

Warren, whose proficiency in the Russian language has been praised publicly by Putin, has since gone on to become a TV personality. He hosts a food and travel programme called “Let’s go, let’s eat” on state-owned NTV. “I kicked the business off by inviting all my friends to breakfast,”  Warren told bne IntelliNews in a 2010 interview, "and gave them a good fry-up with all the trimmings. After breakfast I asked them if they liked the sausages and told them 'I made them' and told them to spread the word.”

Warren sold the company to Michael Sito, a former hedge fund manager and trader, who subsequently offloaded the business to Babb in 2012.

Kings provides sausages and burgers to Marriott, Radisson and Novotel hotels and top Moscow restaurants like Chicago Prime and Scandinavia. Hotels and restaurants make up about 80% of their client base, but Babb is keen expand retail as demand has fallen off from hotels. “Our target market is, of course, the upscale modern Russian,” says Babb. “Our new products are pastrami and jerky with turkey ham in the pipeline. So we are moving away from the sausage theme, although they are still important for our restaurant and hotel clients.”

The company, which employs about 20 people at its premises in Khimiki on the outskirts of Moscow, is equipped with the latest German equipment. Babb said the factory, which currently produces about 7-8 tonnes of meat a month, may double its output to 15 tonnes over the next six months if retail demand accelerates. “We need to hire a sales force to push our retail offering,” he says. “So far, the reception from Azbukha’s buyers has been very positive and we are seeing just 7% of returns, which is good for a new product.”

Kings’ products have also found their way into the Tatar-owned chain Bakhetle, although sales there have been sluggish.

Babb, who is from South Dakota, spent much of his time growing up on this grandparents’ 160-acre farm by helping to milk the cows by hand and herding pigs. “Eggs and milk were sold for cash weekly and the grains were harvested in the fall for modest revenues to help pay the expenses,” he says. “This was the post-World War II norm in the Midwest. America was still rural but rapidly urbanizing.”

Babb came to Moscow via an 18-year stint in Alaska, where he worked as a chartered surveyor and embraced the wild frontier’s terrain through mountaineering and skiing. In 1993, his wife was offered a transfer by her employer, Ernst & Young, to Moscow and the couple relocated to “another wild circus”.

Babb started leasing and renovating apartments and made a decent living until the 1998 default wrecked the market and sent most expats fleeing.

As the Russian stock market recovered sharply, Babb started investing in the early 2000’s and set up a family fund, which accrued an impressive 25-30% return per annum.

He began commuting back to Moscow and dabbled in finance until he came across Warren’s Sausages and Sito, who was eager to liquidate and leave Russia. “I made him an offer ‘take it or leave it’,” says Babb.

Central to the success of King’s over the past four years has been Zalina Abdusalamova, who stepped back from her role as managing partner in April to start a family. “She maintained the business during the periods of turmoil, especially during the collapse of the ruble and transition to primarily domestic ingredients,” says Babb. “Then she set the stage for the modernization of the plant and our launch into supermarkets. She will be retained as a special advisor for unique situations.”

Babb has no plans to exit, nor is the company seeking any external investors to grow. “We will expand by using our existing resources to invest,” says Babb. “We have to keep innovating and developing. Kings is now doing Halal products, and we had a rabbi out to inspect our premises but kosher might be too niche for us right now.”

After a near-miss debt crisis in 2015-16 Russia’s Ministry of Finance took direct control of the worst cases. But now the finances all Russia's regions are under pressure again as they struggle to cope with the corona-shock and soaring costs.

Russia’s regions face a fresh debt crisis as they struggle to cope with the coronavirus pandemic
15 hours ago
The billionaires club, where the mega-wealthy go to meet each other
6 days ago
Russian equity market on hold until US elections pass
3 days ago
Amid war, Armenians closely watching the signals from Russia
10 days ago
TURKEY INSIGHT: Hospital building consortium latest creditor to go for a high stakes restructuring
12 days ago