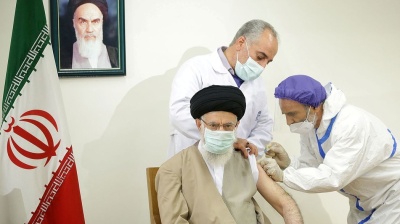 TV footage showed Khamenei, 82, receiving the COVIran Barekat vaccine, developed by a state-affiliated company and sanctioned for public use earlier this month.

With an efficacy of around 80%, COV-Iran Barekat has a greater efficacy than China’s Sinopharm vaccine, a senior member of Iran’s National Task Force for Fighting COVID-19, Minou Mohraz, was cited as saying by Fars News Agency on June 16.

Iran, with a population of 83mn, has officially recorded 83,588 deaths from coronavirus. Neighbouring Turkey, with the same population, has officially registered 49,417 deaths related to the virus. Serious concerns about the reliability of the coronavirus data produced by the health ministries of both countries have been raised by both in-country and external experts but the criticism of Turkey’s statistical releases has been louder and more sustained. Notably, even though Turkey has a much lower death rate, its number of officially logged coronavirus cases stands at 5.39mn, compared to Iran’s 3.15mn. The Middle East country with the third worst coronavirus outbreak is Iraq with an official 1.32mn cases. The Iraqi population numbers 39mn.

Iran is attempting to accelerate its coronavirus vaccination programme. Tehran has several times complained that US sanctions, which Washington says are not meant to hamper humanitarian deliveries to the Islamic Republic, are in fact slowing the sourcing and delivery of vaccines.

In January, Khamenei banned health officials from importing vaccines made in the US and UK, claiming they were unreliable and might be used to spread coronavirus infections to other nations.

Iran is also using Russia's Sputnik V vaccine in its inoculation drive. It is being made locally. A vaccine jointly produced by Iran and Cuba also looks set to come into the picture.

Iran launched human trials of COVIran in December. Other home-made vaccines are in the pipeline.

Iran is also participating in the COVAX scheme, run by the GAVI vaccine alliance and the World Health Organization (WHO). Its objective is to secure fair access to vaccines for poorer countries.

First official results from Bosnian elections put nationalists ahead after exit polls predicted losses
20 hours ago
Georgian MPs want to rid the country of oligarchs, but not all of them
21 hours ago
Hungary agrees on deferred payments with Gazprom for winter gas deliveries
21 hours ago
US sanctions Russia’s CBR head Nabiullina and other officials
21 hours ago
Russia prepares for new attacks against Ukraine from Belarusian territory
21 hours ago