Kazakhstan says it can maintain budget despite oil price fall 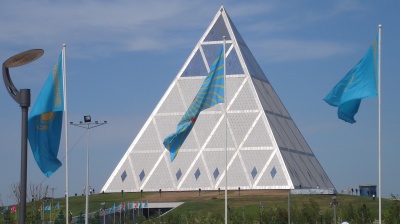 Astana is in position to cope with the low price of oil but not for long.
By Naubet Bisenov in Almaty February 3, 2016

Kazakhstan’s government has decided not to revise central budget parameters despite volatility on the global oil markets, with crude trading well below the annual average price of $40 per barrel envisaged in the 2016 budget. Astana has even claimed it has adopted contingency plans that can cope with the price of oil dropping to as low as $16 per barrel.

On February 2 National Economy Minister Yerbolat Dossayev told journalists in Astana that there were no grounds for revising the budget. “The price [of oil] has increased so we are only holding consultations with the National Bank on a daily and weekly basis, but there are no premises to revise the parameters [of the budget] at the moment,” Dossayev said after a long-awaited government meeting to discuss the revision of the budget. In January Prime Minister Karim Massimov told Russia’s Ria-Novosti news agency that the government was preparing for various oil-price scenarios - $30, $25, $20 and even $16 per barrel.

The minister’s confidence, albeit temporary, stems from the fact that the Kazakh government’s finances do not directly depend on revenue from the oil and gas and other extractive sectors as, according to the law, this is channelled first into the National Oil Fund, which then releases funds as guaranteed annual transfers – $8bn a year – to the budget.

The 2016 central budget, calculated based on an oil price of $40 per barrel and an exchange rate of KZT300 to the dollar, envisages revenue of KZT6.85tn ($22.8bn) and spending of KZT7.41tn ($24.7bn), with a deficit of KZT723bn ($2.41bn), or 1.6% of forecast GDP. The budget revenue includes guaranteed transfers worth $8bn (KZT2.4tn) and targeted transfers of KZT567bn ($1.89bn) for special stimulus programmes decided by President Nursultan Nazarbayev. Anticipating a period of low oil prices, in 2015 the government decided to stop increasing the guaranteed annual transfers by 15% a year.

“Use it up very quickly”

Since the budget doesn’t directly depend on oil revenue, and with KZT21.3tn ($57.7bn at the current exchange rate of KZT369 to the dollar) hoarded in the National Fund as of the beginning of 2016, the Kazakh government has no immediate problems until the National Fund hits the legal limit of 30% of GDP. “Even if we have zero payments into the National Fund, we won’t use it up very quickly,” Finance Minister Bakhyt Sultanov reassured in January 2016.

Kazakhstan’s economy is forecast to reach KZT45.5tn ($123bn at the current exchange rate) in 2016, which means the limit is KZT13.7tn ($37bn) this year. This means even if the low price of oil means economic stagnation or even recession, Astana will be able to tap into some KZT7.6tn of available funds in the National Fund. This is enough for 31 months (given zero income from the extractive services, no change in budget spending and exchange rate). Moreover, the National Fund’s assets are mostly foreign currency-denominated, which given the weaker national currency, allows the government to have more money in tenge.

This assumption is backed by Ministry Finance reports on the performance of the National Fund: out of KZT7.3tn in revenue in 2015, KZT1.6tn came from the extractive sectors and KZT5.7tn was investment income; in 2014 and 2013 (when oil prices were higher than in 2015) the figures were KZT5.4tn, KZT3.5tn and KZT1.9tn and KZT4tn, KZT3.4tn and KZT0.6tn respectively. As the figures show, should the National Bank, which manages the National Fund, be able to maintain the same level of investment income in the near future, it will manage to preserve the assets of the fund at a similar level, if not replenish it if this income is larger than guaranteed annual transfers to the budget.

However, the low oil price means a slowdown or even negative growth in the Kazakh oil and gas sector – the backbone of the economy – because it makes production in some fields unfeasible due to high costs: the government expects oil output to fall to 77mn tonnes in 2016 if the price of oil averages $40 a barrel and to 73mn tonnes at $30 a barrel, compared to 79.4mn tonnes in 2015 and 80.8mn tonnes in 2014. State Statistics Committee figures show that in the fourth quarter of 2015 the oil and gas condensate output started falling faster year on year compared to the decline rate for the rest of 2015. Moreover, the rate of decrease (4.4%) was even greater than the government forecasts in its budget for the entire 2016 (3% at the price of $40 per barrel).

National Energy Minister Dossayev’s optimism about a bounce in the oil prices is not shared by Kazakhstan watchers. The low oil price could still force the government to revise the budget parameters as the economy is showing greater signs of slowdown (though the budget will also receive a windfall thanks to a fall in the exchange rate of the tenge from the KZT300 to the dollar set in the budget to KZT369.27 as of February 2).

The budget expects the Kazakh economy to expand by 2.1% in 2016, although the World Bank has cut its forecasts to 1.1%. The government claimed GDP growth stood at 1.2% in 2015, whereas the World Bank forecast it to have grown by 0.9%. The EIU