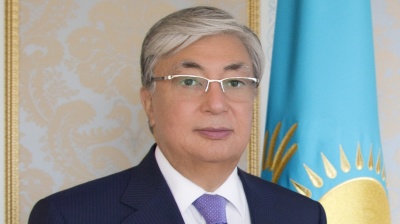 Tokayev is thought to be ruling with Nazarbayev still very much in charge behind the scenes.
By bne IntelliNews July 29, 2019

They include structural reforms and increased social spending—the latter item may have taken on more urgency following the big protests that accompanied the shoo-in early June election of Tokayev, with Kazakhs taking to the streets in their thousands to protest at the lack of genuine democracy in their country and poor living standards experienced despite their country’s oil wealth.

The 2019-2021 budget adopted in July enacts the large social expenditure programme previously announced by ruler of three decades Nazarbayev in February. Including a 50% increase in the minimum wage, tax cuts for low-income earners and investment in infrastructure and housing, it was brought in, say observers, as the now-79-year-old autocrat attempted to ease the transition to his handpicked successor. The programme drawn up under Nazarbayev, widely thought to still be having the final say on Kazakhstan’s essential policy making behind the scenes, also continues to target a close-to-balanced budget by 2021, and reductions to the non-oil deficit.

Government debt ‘low’
“Government debt is low and favourable oil prices will help to contain the budgetary impact of higher government spending,” Fitch said in a note. “Higher oil prices and output boosted fiscal receipts in 2018, helping to shrink the consolidated general government deficit to an estimated 0.6% of GDP from 6.4% in 2017, when support for the banking sector led to a surge in public expenditure.”

The note added: “The ranking forecasts the unconsolidated central government deficit to widen to 2.1% of GDP (from an estimated 1.4% in 2018). Tokayev may seek to consolidate his popularity with further increases in social and investment spending. Following the election, he has asked the prime minister to develop new social policy initiatives and measures to boost employment.”

Speaking to reporters in the Kazakh capital Nur-Sultan on June 26, Tokayev said that officials were aiming to eventually assist one-sixth of the population, or over 3mn people, with debt relief amounting to a total of “a bit less than $1bn”. The debt-relief programme will be financed from the recent targeted transfers from the National Fund of Kazakhstan (NFRK) to the budget.

Tokayev also said the government will not conduct any additional bank rescue operations going forward. However, Fitch said that, given the levels of bad loans at end-2018 revealed by IFRS 9 disclosures, “some medium-sized banks could require fresh capital injections or other forms of external support (such as sales to the Problem Loan Fund) to absorb potential additional impairment losses”.