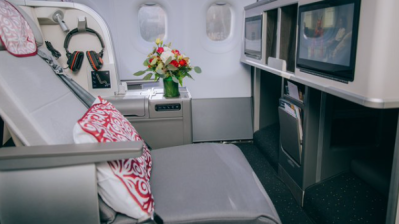 Nomad Club, like the rest of the airline, can expect some post-pandemic change.
By bne IntelIiNews October 28, 2020

Kazakh carrier Air Astana may never again fly to several destinations in Russia, Southeast Asia and Europe due to lasting impacts of the coronavirus (COVID-19) pandemic, the airline's CEO Peter Foster has told Business Traveller Asia-Pacific in an interview.

Before the coronavirus crisis, Air Astana operated a network of 60 international and domestic routes from hubs in largest Kazakh city Almaty and Kazakh capital Nur-Sultan. The company suspended most of its flights in March when the first pandemic lockdown was introduced in Kazakhstan. The carrier’s total capacity in the first nine months of 2020 was 48% lower year on year. The airline also retired eight of its aircraft, including four B757s and four Embraer 190s, in a bid to restructure and adapt to the pandemic crisis. It replaced the B757s with Airbus A321LRs.

Air Astana began resuming its international flights in June amid an easing of travel restrictions. It currently flies to several countries on a limited schedule. these include Kyrgyzstan, Uzbekistan, South Korea, Germany, Russia, Turkey and Dubai.

The airline is presently considering new destinations in order to appeal to leisure travellers seeking transit-free, point-to-point travel, which has become more popular amid the pandemic, according to Foster. The destinations under consideration include the Maldives, locations in Sri Lanka, Da Nang and Nha Trang in Vietnam and possibly even Phuket in Thailand. The new flights would start when travel restrictions ease.

Foster mentioned the current popularity of Air Astana's Turkey and Dubai routes among tourists with load factors averaging around 75%. In contrast, the airline’s five-times weekly Frankfurt route has been experiencing low load factors due to restrictions on travel to the European Union.

“At least half a dozen places we flew to before the pandemic, we may never fly there ever again,” Foster said. “But on the opposite side, there are some places we may fly to that we’ve never flown to in the past.”

“What seems to be becoming very apparent is that people, particularly those travelling on holiday for leisure reasons, do not want to go through hub airports anymore. They don’t want to hang out in large airports or large cities with their families. They want to go to point A to point B, and point B being their final destination,” Foster noted in the interview.

Two of Air Astana’s largest markets are Russia and China. The airline recently resumed flights between Nur-Sultan and Moscow. Before the pandemic, Air Astana operated 54 frequencies a week to various destinations in Russia.

Foster also pointed out that the airline is looking into re-launching its routes to China.

The chief executive also elaborated on the company’s financial situation, noting that it continues to be in “good shape” as 2019 was an exceptionally good year. As such, the airline currently has no plans to seek a government bailout amid the pandemic.

Air Astana expects a return to profitability in early 2021 depending on the trajectory of the ongoing crisis.