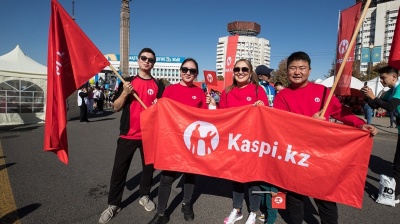 Shards of porcelain cat tumbled out of Zhanibek Musayev’s hand along with the coins and banknotes. One blow with a pair of pliers was all it took to crack open his kids’ feline-shaped piggy bank, which held years of savings.

“I’ll give it all back. But right now, our family really needs the cash,” Musayev told the two children.

Outside, in Kazakhstan’s commercial capital, Almaty, looters were running amok after early January’s peaceful protests were hijacked by a ferocious mob. In a panic, the government shut down the internet, hoping that might take the momentum out of the unrest.

Even when the violence subsided, the internet stayed off for days. And that was a major problem for the Musayevs, one of a growing number of families in Kazakhstan to have forsworn hard cash in favour of cards and mobile apps.

Kaspi, which listed on the London Stock Exchange to much international fanfare in 2020, has reinvented how many Kazakhs do their shopping.

When its mobile app rolled out in June 2017, it instantly popularized a whole new style of money-management and spending. Users can exchange money via one another’s phones, easily set instalment payments for goods and swipe the phone over terminals in stores to pay for purchases.

Mobile phone-based transactions have become so widespread that even tiny little businesses, like shoe repair booths, for example, will accept that form of payment. There are even stories of traffic cops taking bribes that way, although it is said they give other people’s phone numbers for safe measure.

Everyone is revelling in this high-tech revolution. Well, almost everyone. The taxman isn’t happy.

It was in the autumn of 2019, that the Finance Ministry, under whose auspices the State Revenue Committee operates, first announced it was trying to come up with ways of taxing cellphone-based transactions.

“Nowadays, Kaspi Gold payments have become a very popular mechanism ... [But] these transactions are not being recorded fiscally,” Deputy Finance Minister Ruslan Yensebayev told fellow government officials in November that year. “We thought about banning this mechanism. But that might overall not have a very positive effect on our economy.”

Even the passing talk of bans sparked howls of indignation online. Azat Peruashev, the leader of the ostensibly pro-business pocket party Ak Zhol, appealed to the government to back off.

“This is not where you are going to find your underground millionaires. [Kaspi users] are just people who ask nothing of the government and who are trying to earn their crust of bread,” Peruashev said at the time. “You’d be better off looking for the people extorting millions in bribes and salting billions away in offshore banks.”

When President Kassym-Jomart Tokayev spoke in a state of the nation speech in September 2019 about the need to help small businesses flourish, it put the matter to bed.

In December, Tokayev approved new changes to the tax code that require, among other things, that transactions conducted by mobile phone now be declared to the tax authorities. Apps should under these rules include a function enabling users to make a surcharge payment to be forwarded to the state coffers later.

Although the amendments legally came into force on January 1, they will in practice take effect much later. At the same time as he gave that 2019 speech, Tokayev announced that small businesses would be granted tax exemptions for a three-year period.

In any event, there is only so much the taxman can do, since electronic cash transfers are so informal, instantaneous and ubiquitous. But another parallel initiative intended to bring the shadow economy into the open has set another timer running. Under a four-phase so-called Universal Declaration process, Kazakh citizens – starting with civil servants last year and ending with regular members of the public in 2025 – will be required to provide the government with a full accounting of their fixed assets and cash holdings. In the fullness of time, banks will under this initiative be required to provide details about transaction services they are providing to its clients.

When news of last year’s tax amendments spread, many vendors at markets and small shops in Almaty began refusing mobile cash transfers as payment for goods. That sparked a rush on ATMs, many of which quickly ran dry.

Kaspi declined to offer Eurasianet comment for this article. But its customers had a lot to say about the government’s tax law tinkering.

“Doesn’t the government get enough income from oil exports?” Aisha Tuleberdiyeva, a sales clerk at a food pavilion in an Almaty shopping mall, complained to Eurasianet. “The money we earn is barely enough to live on, so why not just leave us alone?”

Tuleberdiyeva said that any taxes levied on sales will, in any case, fall on the shoulders of consumers.

But Konstantin Pak, a fintech specialist at the Association of Financiers, a banking lobbying group involved in the drafting of the new tax law, said that the tax amendments would not entail any additional workload for retailers.

“Accordingly, we do not predict any impact of this law on prices for end consumers in the coming years,” Pak said.

The cashless revolution has brought some pleasant ancillary benefits; most notably, a drop in crime. Nurzhan Usmanov, a police officer in Almaty, said that reports of pickpocketing have dropped off dramatically in recent years.

“This is natural. People have stopped carrying cash with them, everyone has Kaspi,” Usmanov told Eurasianet.

That claim is backed up by data. The Prosecutor General’s Office has reported that the number of pickpocketing offenses recorded between January and November 2021 amounted to 1,800, a 45% drop on the number seen over all of 2020.

Ilyas Kaldybayev, a faithful Kaspi user, worries about the potential for tax reforms to derail an unusual international success story for Kazakhstan.

“I’ve been to other countries, and I have not seen anything like it,” he told Eurasianet. “Our authorities should support and develop such services, not put a spoke in their wheel.”

Kazakhstan: Sanctions likely behind fresh delay at new Baikonur launchpad
2 days ago
EWDN: How Russian game developers are being hit by the shockwave of war
3 days ago
Disney+ comes online in Turkey
3 days ago
Romanian crowdfunding platform SeedBlink helps Bulgarian startup Agriniser raise funds
9 days ago
Investments into Serbian startups soared more than 600% in 2021
9 days ago