Istanbul revote: Erdogan’s ‘Ocalan’ strategy to win over Kurds looks like a dud 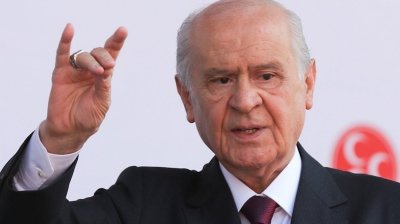 Erdogan's ultra-nationalist ally, MHP leader Devlet Bahceli. Like Turkey's president, he's got a challenge on his hands explaining exactly how his party views the PKK right now.
By Akin Nazli in Belgrade June 21, 2019

The behaviour of Turkish President Recep Tayyip Erdogan is fuelling rumours that some Istanbul revote polls suggesting a stark lead for opposition candidate Ekrem Imamoglu in his bid to on June 23 reclaim the business and cultural capital’s mayoralty—having had it taken away from him by election officials after he won a local elections victory at the end of March—are undoubtedly correct.

A scandal is in the air following the release of an open letter from the jailed leader of the outlawed Kurdistan Workers’ Party (PKK), Abdullah Ocalan, by his lawyers, whom the government has permitted to visit their client in recent months.

The lawyers advised that Ocalan has recommended that the pro-Kurdish Peoples’ Democratic Party (HDP) should choose a ‘third way’ as regards the Istanbul re-run by calling on Kurds in the city to remain neutral rather than collectively vote for Imamoglu as they did on March 31.

However, and tellingly, Ocalan added that as a political party the HDP would make its own decision on its recommendation—and observers see the latest standpoint of the HDP as coded advice to Kurds in Istanbul to vote for Imamoglu.

The fact that such a letter from Ocalan was publicly released amounts to a big controversy in Turkey because there are currently thousands of people in Erdogan’s jails for allegedly simply showing support for the outlawed PKK with tweets.

Erdogan seemed to get behind Ocalan—whom critics mockingly described as his new coalition partner—when claiming during a televised interview that there was a power struggle between the HDP and the PKK, and between imprisoned former HDP co-head Selahattin Demirtas and Ocalan, bianet reported.

Erdogan, 65, also had what some observers wryly said was a Freudian slip or ‘senior moment’ during a revote campaign rally, mistakenly accusing his People’s Alliance of partnering with terrorist organisations rather than the rival Nation Alliance led by Imamoglu’s party, the Republican Peoples’ Party (CHP). That was an error that won’t have gone down well with Devlet Bahceli, leader of the ultra-nationalist MHP, which is the ruling coalition junior partner of Erdogan’s Justice and Development Party (AKP). Bahceli also claimed that the call for neutrality from Ocalan was a result of a clash between the PKK and HDP.

In response to Ocalan's letter, the HDP said in a written statement that its strategy for the Istanbul re-run remains consistent with Ocalan’s message.

Although Erdogan’s Ocalan move has been nullified by the HDP, the president’s sudden fondness for the Kurds of recent days found new expression on June 21 when he hosted Iraqi Kurdistan President Nechirvan Barzani in Istanbul.

When one adds the dire state of the economy to the mix, it is clear that Erdogan’s fortunes are sinking at a worrying rate for him at present, but he is not giving up. For instance, this week has seen him once more spouting angry rhetoric in the direction of Imamoglu (whose shock win in the original Istanbul election was annulled on a split vote by election officials who came under pressure from the Erdogan camp to address “irregularities”) after a period of uncharacterically playing it aloof. The theory in circulation for the change is that pollsters advised him that his strategy of near silence was not working with voters.

His current campaign appears to be in complete chaos. He is full of aggression while at the same time he is trying to strike some last-minute deals with any political leaders or other influential figures that might swing some votes for the revote candidate of AKP, ex-PM Binali Yildirim, who lost to Imamoglu in the first poll.

However, Erdogan has nothing new to tell voters. He has merely put forward some nonsensical accusations such as Imamoglu “called the governor of Ordu a dog” or “Imamoglu has used tactics of the terrorist organisation FETO that attempted the 2016 coup”.

Claims that Imamoglu has Greek roots and is in partnership with the PKK appear to have been left by the wayside.

Erdogan has also been meeting with some old allies from his former party. But prior to the March local elections he had even accused these same people of partnering with the PKK.

Turkey’s populist authoritarian leader of 17 years has, it seems, by now almost literally attacked every social and political segment one might think of. But plans to draw some support from such attacks have dramatically failed one by one.

The question is whether Erdogan has any bigger surprises planned for the Sunday vote or aftermath.

Turkey is a tense place ahead of election day.