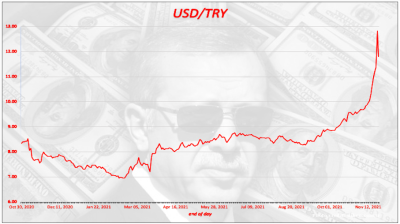 Though this blog has been sounding the alert for quite some time, most of the world with an interest in these matters is only now waking up to the shocking truth: President Recep Tayyip Erdogan really, truly is subjecting Turkey—like some tattered and torn guinea pig—to mad economic experiments.

The 15% collapse in the value of the Turkish lira (TRY) against the USD on November 23 following Erdogan’s unhinged declaration of his “economic war of independence” (despite Turkey’s huge reliance on global debt markets) was finally enough to persuade folk that we’ve not been kidding around. Yes, ‘Erdoganomics’ will enter the history books in economic literature—but only under “C” for “Cuckoo”. Or “B” for “Bonkers” if you prefer.

Despite the uproar ignited by the sorry sight of the lira going into freefall, Erdogan remains locked on course, committed to cutting interest rates despite galloping inflation. Right now, there’s a weird sensation in Turkey. From farmers to industrialists to shopkeepers to consumers, all economic actors in the country feel like they are experiencing some kind of simulation. It would almost be no surprise to see Zeus entering the picture, haphazardly sending down bolts of lightning on the innocent masses below.

Some of the wiser souls, of course, have already realised that society had better snap out of its trance, come to terms with the fact that their president is even more trouble than bargained for and do something about it. Thus, on the evening of November 23, some limited street protests broke out. However—as so often with Turkey—it’s not that simple. The opposition is afraid that the regime’s trolls are actually working to drive people on to the streets as something they think they can turn to despotic advantage. Police violence and chaos could follow.

Violence has worked in favour of the regime so far. However, this new situation is somewhat different to what has gone before in many respects.

For instance, there must be around 30mn hungry people at the moment in Turkey. Then there’s the health of Erdogan. Turkey is said to remain a one-man show, but there has been an unmistakable deterioration in Erdogan’s countenance and demeanour in recent months (oh, we are being so polite here, but suffice to say, given all the rumours in circulation you’d need a team of docs from more than one field to reassure you of the state of the dear leader) and it begs a question or three: Who is governing Turkey at the moment? Who is using the dictatorial powers Erdogan has amassed? Who is writing what Erdogan is reading on the prompters? And the biggest question of all: how long can this ruler of three decades continue?

The extreme volatility in the exchange rates has reached a level that will stop the country’s exports, Jak Eskinazi, head of the Aegean Exporters Association (EIB) in Izmir, said on November 24.

“Commercial activity has deteriorated to a deadly extent. We, as exporters, are not able to set prices. We have reached a point where we cannot buy merchandise. Production and exports are about to stop,” Eskinazi said.

“In the Turkish economy, many inputs, led by raw materials, energy and logistics are indexed to FX. A daily volatility of 10-15% in FX is not a volatility that can be coped with… The equity of our enterprises has melted. There’s no need to be a soothsayer, the banks will not be able to extend loans in the next phase,” he added.

On November 23, we reported that domestic commercial activity was also grinding to a halt.

At the supermarkets, quotas are currently being applied to many products, ranging from oil to sugar.

According to business daily Dunya, there is not a single representative of industry who has not been voicing stress over the current situation.

Also on November 23, Apple (Nasdaq/APL) halted sales in Turkey without giving any notice.

Price hikes in fuels now happen every day and have become dog-bites-man stories.

The Japanese individual investors known for holding long positions in the lira have closed their positions again.

Five-year credit default swaps (CDS) on Turkey are headed to the 500-level.

The great master Joseph Goebbels argued that keeping the slaves under a non-stop information bombardment is a must for the success of propaganda.

Since 2016, it has been Qatar rescuing Turkey from its economic collapse.

Now, it is the turn of the United Arab Emirates (UAE). Yes, the invertebrate Islamists of Erdogan's AKP are now circulating the message that it’s time to snug up with the UAE.

The challenge: Find something that is not rallying against the Turkish lira. Bread prices are rumoured to have jumped to TRY5 from TRY2.5.