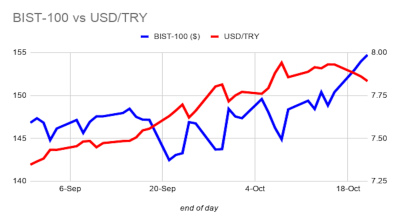 Roll up! Roll up! Come and see the amazing new wave of positive headlines on Turkey flooding out of the market-making newswires once again. The buzz is built and it could seem to the onlooker that it is already late in the day to position in Turkish assets. The critical point on the horizon, however, is the rate-setting meeting to be held on October 22. Circle 14:00 hours Istanbul time, when the curtain will be lifted on the result of the central bank’s deliberations.

Expectations for a 200bp hike are already bought. A lower hike could thus prove a bad surprise following the flashily-packaged “no-hike rate hike” surprise at the last meeting, held on September 24.

Adding just 150-200bp to the headline policy rate would mean a second “no-hike rate hike”. Then we might see the sale of the expectation already bought after the realisation.

On the other hand, a higher-than-expected rate hike would still mean nothing against the bleakness that is Turkey’s lot at the moment, but it might signify that the government is serious about attracting some portfolio inflows at the cost of putting more pressure on the struggling millions in the country who have lived with a wretched economic reality for years.

Perhaps that positivity might continue until President Recep Tayyip Erdogan decides enough is enough and he has little option but to pour some bank loans the way of ordinary Turks.

Comparisons between the current situation on the Turkish markets and past experience overlooks a small detail. The government has burnt through more than $100bn in reserves since last year and it is still chucking more on the fire to support the beleaguered lira.

Some still insist on using official data to deliver some “scientific” arguments. The most popular route is through the real effective exchange rate (REER).

Yet even Turkish kids on the block would tell you that Turkey’s official inflation rate is fake. But go ahead, use your “scientific” genius to portray the lira at its CPI-based real value as cheaper than peers. Look away from that spuriously low official inflation. And call it "analysis".

Well, allow this blog to conclude with its own “analysis” and an analyst’s note to the wise.

Turkish markets are right now as speculative as they have ever been. But as always there “toughie traders” out there with a cold eye in the hunt for hit-and-run opportunities along with the Turkish government. The local gamblers are small fry. They only play the modest trading boards.

“Mkt wants/demands an unequivocal, conventional min 150bp rate hike from CBT Thursday. I think given CBT funding @ present, WACF is already >12%, that CBT will provide this. TRY will strengthen a bit. Therefore, ST trading opportunity to buy either AKBNK or GARAN. TRY could be 7.80 Friday, maybe even stronger if dollar weakness, of which I am the high priest, continues. Trading call buy AK 5.40 or GAR 7.50. Dump on Friday (or Thurs if the unthinkable happens and they don't hike),” Julian Rimmer of Investec wrote on October 20 in an emailed note to investors.

ISTANBUL BLOG: Turkey's virus disaster. Where does one start?