ISTANBUL BLOG: Imamoglu, redeemer of hope for Turks, to debut on global finance stage in London 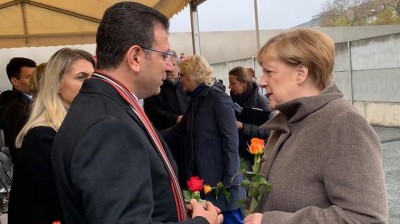 Imamoglu was in Istanbul's sister city, Berlin, to celebrate the 30th anniversary of the fall of the Berlin Wall.
By Akin Nazli in Belgrade November 13, 2019

Istanbul Mayor Ekrem Imamoglu—the opposition politician who shook Turkey’s Erdogan administration by winning the local election vote and then the ‘revote’ for the iconic mayorship of the Turkish business and cultural capital—will on November 14-15 pay a “working visit” to London for meetings with global finance industry representatives, local media outlets reported on November 12.

Coincidentally, on the other side of the Atlantic, two of the leading ‘patriots’ of the current era, Turkish President Recep Tayyip Erdogan and American counterpart Donald Trump, were set to meet at the White House on November 13 to discuss how they will deal with the salvoes of the ‘globalist’ US establishment.

On November 14, Imamoglu will visit the Turkish ambassador to London, Umit Yalcin, and meet with the deputy president of the Royal Institute of International Affairs (Chatham House), Simon Fraser, before visiting London Mayor Sadiq Khan.

Later on in the day, Imamoglu will appear on Bloomberg TV in an interview.

During the evening, Imamoglu will take part in a meeting organised by the London association of his political party, the Republican People’s Party (CHP).

New phase of the ‘fairytale’

Imamoglu’s global finance debut will mark a new phase in ‘the Imamoglu fairytale’, professionally created and managed by the mayor’s political campaign director, Necati Ozkan, since 2014 and that year’s local polls in Istanbul’s Beylikduzu district.

The story is the archaic, but always popular, theme of the adventures of an ordinary, but kind and appealing, guy battling against the devil/kings/pharaohs/windmills/the US establishment etcetera.

The CHP advertising campaign director, Ates Ilyas Bassoy, who is also the author of the “Why does AKP win? Why does CHP lose?” and “Radical Love” books, added the simplest, age-old uplifting ingredient to the story, namely love. Bassoy simply defined ‘radical love’ as ‘to love the one who hates you’—and that offers a telling contrast to the US mainstream media that hates Trump or the former Turkish mainstream media—now dismantled by the regime—who hated Erdogan.

During campaigning prior to Turkey’s March 31 local polls, CHP candidates were told to follow two simple rules set by Bassoy: “Ignore Erdogan and love those who love Erdogan.”

Sure, it’s the economy stupid, but a typical CHP candidate for Istanbul would have simply lectured the “ignorant people” on Ataturk’s magnificence and have crossed swords in battling the utterances of Erdogan, the master of binary opposition. And on election night, he would hit the bottle after the AKP candidate announced their victory. As a consequence, representatives of global finance would be busy holding meetings to discuss how they were compelled to keep Erdogan alive to rescue their money.

Imamoglu joined the race for Istanbul as the unknown mayor of a small satellite district of the city and emerged as the redeemer of hope for Turks cast into the shadows by Turkey’s strongman and his foreign sponsors. And he is, in fact, by himself a Lionel Messi of public relations.

Turks have seen this movie several times since 1950 brought the country’s first multi-party elections. Some of its darker characters presently feature in the ‘US vs. Halkbank’ case filed at a Manhattan court, a case which Erdogan would like to see Trump shut down.

In an ideal world, it would be desirable that people took control of their own futures rather than chasing after heroic rabbits pulled from the hat. However, Imamoglu, who has not committed any crimes—particularly against humanity—and has not subcontracted to any global gangs as yet, simply deserves a chance to meet whomever he wants to and do whatever he wants, at least until he can remove the Erdogan wreckage.