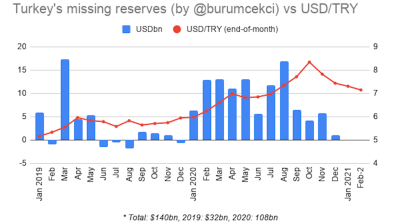 One positive for those looking to juice the lira is that the Erdogan regime’s invisible hand remains there to intervene at adverse moments.
By Akin Nazli in Belgrade February 2, 2021

The American investment bank and financial services corporation has opened a short position in 3-month EUR/TRY contracts, which stand at 8.6644 versus a spot rate of 8.61 as of February 2, with a target of 8.175 and a stop-loss of 8.96.

There is a visible short-term movement in the lira but calling customers to buy on a three-month term should raise eyebrows, not that it is out of tune with the habits of the global finance industry.

If individual investors come together to blast towards the stop-loss levels, the finance industry will likely be pursuing former FED chair and now US Treasury Secretary Janet Yellen for help.

On the global front, USD printing continues and financial asset prices are booming further with some short-term fluctuations. It is time to get extra smart as the bait is getting bigger—take below 7.00 in the USD/TRY as your example.

Societe Generale has also opened a short USD/TRY position, with a target of 6.71 and a stop-loss of 7.75, according to BloombergHT.

Societe is the smarter here as it secures a higher stop-loss level by setting its target below the two-month-long fixed USD/TRY level of 6.85 seen last summer, prior to the sharp devaluation that took Turkey towards the edge of another balance of payments crisis and on November 6 resulted in a sharp U-turn in the attitude struck by the Erdogan regime towards global finance.

On January 18, HSBC’s short USD/TRY position in selling USD against the lira, which it opened on January 5 with a target of 7.10 and a stop-loss of 7.53, became history within two weeks after the USD/TRY moved beyond the British bank’s stop-loss level.