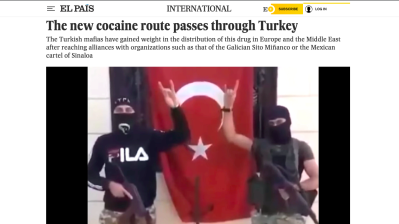 In this video frame, Turkish criminals are said to be sending greetings to the Mexican Sinaloa Cartel and its leader, former farmer turned drug lord Ismael “El Mayo” Zambada. The individuals salute the wolf, an identifying symbol of the extreme right in Turkey.
By Akin Nazli June 29, 2021

Adding to a spate of reports on drug busts in Turkey, trade ministry officials on June 23 said they seized 463 kilograms of cocaine stashed in banana containers that arrived at Mersin Port after a journey from Ecuador. Turkey's trade minister, Mehmet Mus, a man seen as in the ‘Pelican’ camp of Berat Albayrak—the son-in-law of President Recep Tayyip Erdogan who last November stepped down from the post of finance minister—announced the seizure on June 27 during a press briefing.

Narco traffic headed to Turkey is increasingly in the spotlight. The country has long formed part of a major heroin route—the dismantling of the infamous “French Connection” that ran from the 1930s to 1970s certainly didn’t put a stop to all the traffic—and there are claims that its importance is now rising not only in terms of drugs consumption, but as a cocaine route.

The Turkish state during the good old heroin trading days.

The Turkish trade ministry did not state from which port in Ecuador the cocaine, seized on June 23, was shipped.

It is important to note that Mus is Albayrak’s man because of late organised criminal gangs in Turkey have been at odds over drug trade revelations made by the fugitive YouTuber mafioso Sedat “The Botox” Peker.

It is more than a little strange that it is the trade minister who is announcing drug busts rather than the interior minister, Suleyman Soylu, a big target of Peker allegations and a rival of Albayrak. Soylu, who’s been left with a lot of explaining to do by Peker, could do with a few big announcements of his own.

The bananas may also be an important detail here. It is rather too easy to find claims of drug smugglers using the banana trade. Another well-known, but lesser-known, fact is that cheese is also a habitual criminal.

Previously, on June 16, Mus wrote on Twitter that customs officers seized 1.3 tonnes of cocaine that arrived at Mersin Port from the Ecuadorian port of Puerto Bolivar in banana consignments.

“We confiscated the cocaine—bravo, good for you. Who was the receiver of this cocaine, bro?” The Botox—apparently holed up in Dubai and recently been barred by United Arab Emirates officials from releasing further YouTube videos—asked on Twitter in response to Mus posting a statement on social media.

In June 2020, the Colombian government announced that it seized 4,928kg of cocaine at Buenaventura Port that was due to set sail for Turkey.

On May 2, in his first video post, Peker alleged that Mehmet Agar was the intended recipient of this shipment.

It was in his seventh video post, on May 23, that he claimed that Erkam Yildirim, ex-PM Binali Yildirim’s son, went to Venezuela to establish a new cocaine route from La Guaira port in Caracas.

According to The Botox, the US Drug Enforcement Agency (DEA) is strong in Colombia. After the Colombian bust of cocaine bound for Turkey, DEA-free Venezuela presented itself as a good option since it has a 2,220-kilometre border with Colombia.

The Botox pointed out that Latakia, the principal port city of Syria, is also DEA-free since it is under the control of Russia. A claim in circulation is that the cocaine that arrives in Turkey is distributed to the Middle East since it fetches higher prices there in comparison to Europe.

The Botox also claimed that Halil Falyali, who has casino hotels and websites based in Northern Cyprus, is the master of trafficking money. He is also supposedly the person who sent Erkam Yildirim to Venezuela.

Erkam Yildirim is not involved in trading drugs but Falyali has “tapes” of him, according to The Botox. The tapes are “not about gambling but about receiving bribes and something else”.

Binali Yildirim confirmed that his son Erkam went to Venezuela, but said the journey was made to deliver some supplies such as face masks needed amid the coronavirus (COVID-19) pandemic.

Pinar Barut of Ozgur Gazete and Nuri Silay of Gazedda Kibris in Northern Cyprus have received threats and phone calls demanding the removal of content about drug trafficking allegations directed at Falyali, the International Press Institute (IPI) said on June 9 in a statement.

After their newspapers refused to remove the contents, they were targeted with cyber-attacks.

Falyali has close ties to both the Northern Cypriot and Turkish governments. He has tapes of everyone, according to The Botox.

Halil Falyali thanks Interior Minister Suleyman Soylu while participating in a fund-raising campaign on Turkish TV.

Falyali confirmed during an interview with a Turkish YouTuber that Metin Topuz, a translator and fixer for the DEA in Istanbul who was arrested following the failed coup attempt against Erdogan in 2016 on the basis of allegations about Gulenist connections, called him and asked to meet. However, Falyali rejected the approach.

According to trade ministry data, cocaine seizures have boomed in recent years in Turkey.

In May 2019, 1,500kg of Turkey-bound cocaine was seized at Puerto Cristobal in Panama.

In May 2021, 616kg of cocaine was seized in Port PSA in Panama. It was also said to have been packed for Turkey.

In April 2021, 27 tonnes of cocaine was seized in Antwerp, Belgium. The Belgian and Dutch cocaine “godfathers” largely now hide out in Dubai and Turkey, according to the Guardian.

In 2017, the French and Dutch police infiltrated the encrypted messaging app EncroChat, which was used by drug smugglers.

The record jumps in cocaine seizures made by Turkish police since 2017 in fact demonstrate that criminal gangs, under pressure to develop a new transit route given heavy seizures in the European countries, switched to a route through Turkey, the Turkish counter narcotics department said in its 2020 drugs report.

On May 16, Mus wrote on Twitter that the trade ministry had seized one tonne of captagon (the amphetamine drug fenethylline hydrochloride, sometimes known as the “poor man’s cocaine”). Captagon is another story. Syria was turned into a big captagon producer after the Friends of Syria Group brought democracy there.