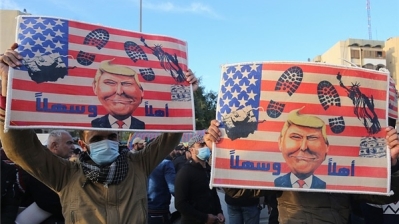 Angry protesters across many parts of the Middle East have warned Trump will reap the whirlwind he has sown. / Fars News Agency.
By bne IntelliNews January 6, 2020

As millions of Iranians took to the streets [Fars news agency video] to mourn Qassem Soleimani—the commanding general and second most important Iranian official slain in a Baghdad drone strike ordered by Donald Trump on January 3—and Iran’s military aerospace division commander warned that the only appropriate response would be “the complete destruction of America in the region”, US allies were on January 6 offering Washington only lukewarm support.

Not only Nato, but also Israel, emphasised that they were not involved in the airstrike.

Israeli PM Benjamin Netanyahu told a meeting of his security cabinet: “The assassination of Suleimani isn’t an Israeli event but an American event. We were not involved and should not be dragged into it.”

Nato secretary general Jens Stoltenberg said: “This is a US decision, it is not a decision taken by neither the global coalition nor Nato, but all allies are concerned about Iran’s destabilizing activities in the region, Iran’s support to different terrorist groups.”

Confirming the suspension of the Nato training mission in Iraq—with tensions mounting over possible reprisals from Iran or proxy groups—Stoltenberg added: “In everything that we do, the safety of our personnel is paramount. As such, we have temporarily suspended our training on the ground.”

The Saudi deputy defence minister, Khalid bin Salman, the younger brother of the kingdom’s crown prince, was, meanwhile, in Washington to call for restraint from the Trump administration. Trump has warned any revenge from Iran that targets US member of the military or civilians may be met by a “disproportionate” response.

Iraq’s caretaker prime minister, Adil Abdul-Mahdi, summoned the US ambassador to Baghdad, Matthew Tueller, to propose that their two countries cooperate in organising the withdrawal of the more than 5,000 US soldiers currently in Iraq on counter-Islamic State and training missions. However, he did not state a deadline for the departure.

As well as bringing the “destruction” warning from Iranian aerospace commander Brig Gen Amir Ali Hajizadeh, the day also brought news of the Pentagon sending more reinforcements to the Middle East. US defence officials said the roughly 2,500-strong Marine force on board the Bataan Amphibious Ready Group, equipped with Cobra helicopters and Harrier jets, would be sent to the region from their current position in the Mediterranean. Three thousand airborne troops are already bound for Kuwait.

Trump continued to come under heavy criticism for his threat to possibly strike Iranian culture sites in response to any move for vengeance from Iran. He said there would be 52 targets, with the number representing the number of Americans taken hostage when the US embassy in Tehran was seized after the 1979  Islamic Revolution.

“Never threaten the Iranian nation,” responded Iranian President Hassan Rouhani, adding: “Those who refer to the number 52 should also remember the number 290.” That number refers to the number of Iranians killed when a US warship accidentally shot down a civilian airliner, Iran Air 655, in 1988.

Analysts also continued to look at how the Soleimani killing could weaken the Western allies’ forces in the Middle East to the point where terrorist groups such as Islamic State could regenerate.

One of the first tweets Trump sent out during the morning of January 6 on the US East coast was “IRAN WILL NEVER HAVE NUCLEAR WEAPONS!”

Kyrgyzstan: Eccentric health minister fights for his job amid claims of corruption and bullying
2 hours ago
Azov commanders have remained behind in the Mariupol steelworks to continue the fight
3 hours ago
Russia hopes Chinese carmakers will help revive Moskvitch brand
3 hours ago
Russia may leave the WTO and WHO. In practice, it never really joined
3 hours ago
UN special rapporteur issues damning indictment on human cost of sanctions in Iran
8 hours ago