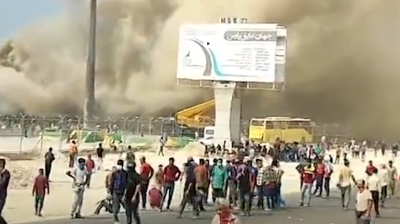 In what could be an ominous development for the regime in Iran, oil and petrochemical workers are reported to have come out on strike in solidarity with the protesters who have mounted fierce street demonstrations across the country for approaching a month.

More than 1,000 workers at the Bushehr and Damavand petrochemical plants carried out a threat to go on strike, blocking streets and chanting “death to the dictator”, according to Radio Farda. Social media indicated the walkouts then spread to the Kangan refinery. Official state media claimed the industrial action was simply down to a temporary problem over the late payment of wages. Should it spread widely across Iran’s key oil and petrochemical industries, Tehran’s difficulties will intensify.

At the weekend, meanwhile, there were reports in Tehran that some merchants at the bazaar shut down and joined the protests. That might also concern the powers that maintain Iran’s theocratic state as the capital’s bazaar merchants are usually seen as loyal to the government.

Iran's political leadership, clearly struggling to put an end to the protests led by women and ‘Generation Z’ young people, held a crisis meeting on October 9. Afterwards, officials called on Iranians to preserve national unity and stand against the "hostile plots" of the enemies of the Islamic system. Tehran has made various accusations, pointing the finger at Saudi Arabia, Israel, the US and other foes for fomenting the unrest.

The Oslo-based Iran Human Rights watchdog said on October 10 that at least 185 protesters have been killed by the security forces, including at least 19 children. The Iranian official press has published the names of 24 security officials the authorities claim have been killed by “rioters” since the protests started.

Unverified video footage posted on social media on October 10 showed huge protests in the western Iranian city of Sanandaj. There were reports of clashes between demonstrators and security forces, with loud gunfire and explosions heard throughout the city.

Several Iranian celebrities, meanwhile, including football star Ali Daei, have been reportedly been interrogated and had their passports confiscated by the authorities. The interrogations were apparently ordered after the celebrities showed support for the protesters.

Tehran has condemned “partisan” foreign-based Farsi-language media outlets for what it says are efforts to exaggerate or trigger protests. BBC Persian and Iran International are two news providers accused by the regime of blatantly misleading coverage.

BBC Persian coverage on October 10 included the story of how videos posted online showed an Iranian teenager, Nika Shakarami, 16, protesting hours before her death. Shakarami is seen standing on a dumpster and burning her headscarf in Tehran. She later disappeared after telling a friend she was being chased by police. Her mother, Nasrin,  has accused security forces of murdering her daughter. Officials have claimed she died after being thrown from a building that was under construction, possibly by workmen.

Protests have swept Iran since Mahsa Amini. a 22-year-old Iranian Kurdish woman, died on September 16 while being held by Tehran morality police for wearing "inappropriate attire".

Sanctions imposed by the British government on October 10 banned Iran’s morality police and other key public figures from going to the UK.

"Hey world, hear me: I want a revolution. I want to live freely and I am ready to die for it," Reuters quoted a 17-year-old protester in a central Iranian city as saying. The news agency did not disclose the name and location of the protester due to security concerns. The protester added: "Instead of dying every minute under this regime's repression, I prefer to die with their [security forces’] bullets in protests for freedom."