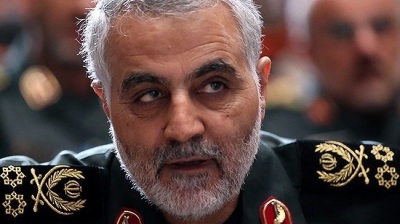 Referring to Trump, Suleimani said in his speech: “The Quds force and I are your match. We don’t go to sleep at night before thinking about you.” / Mahmoud Hosseini, Tasnim News Agency.
By bne IntelliNews July 26, 2018

Over to you Big Boy—all eyes were on Donald Trump’s tweet stream late on July 26 as senior Iranian military commander Qassem Suleimani squared up to the US president, mocking the threats he has lately made to Iran on Twitter, likening him to a gambler and nightclub owner, deriding the performance of US armed forces in Afghanistan and warning that the Red Sea region was no longer secure for the American military.

With tensions building over Trump’s policy of targeting an unprecedented range of heavy sanctions at Iran in a bid to economically cripple the country to the point where Tehran has no choice but to renegotiate its role in the Middle East, Major General Suleimani—who is in charge of the Quds force, the arm of the Islamic Revolutionary Guard Corps (IRGC) that takes on operations outside of Iran and clandestine assignments—said during a speech in Iran’s western city of Hamedan that Trump should know that the Islamic Republic would be the one to “end” any war between their two countries.

“I’m telling you, Mr Trump the gambler, I am telling you: know that where you are not thinking of, we are near you. Places you cannot imagine, we are next to you,” said Suleimani, according to a Tasnim news agency report.

He added: “We, the Iranian nation, have gone through tough events. You may begin a war, but it is us who will end it. Go ask your predecessors about it. So stop threatening us. We are ready to stand up against you. The Red Sea which was secure is no longer secure for the presence of American [military]... The Quds force and I are your match. We don’t go to sleep at night before thinking about you.”

Red Sea oil exports suspended
Suleimani’s warning to the US about the Red Sea comes on the same day Saudi Arabia, Iran’s regional arch-rival, suspended oil exports through the Bab al-Mandeb strategic shipping lane due to missile attacks on two oil tankers by Iranian-backed Houthi rebels off the Yemen coast.

Referring to Trump’s ALL-CAPS tweeted threat addressed to Iranian President Hassan Rouhani—a pragmatic centrist who despite protests from Iranian hardliners in late 2015 decided to trust the US enough in putting Iran’s signature to the multilateral nuclear deal which Trump went on to unilaterally abandon in early May this year—Suleimani reportedly told Trump in his speech: “It is not in our president’s dignity to respond to you, but I, as a soldier, will.” He then added: “[Your] language belongs to nightclubs. Only a nightclub owner uses such language to communicate with the world.”

“What could you do that you haven’t already done over the past 20 years?” Suleimani, sometimes referred to as “The Shadow Commander”, asked of the US. “You came to Afghanistan with dozens of tanks and armoured vehicles and hundreds of advanced helicopters and committed crimes there but what the hell have you achieved [in Afghanistan] between 2001 and 2018 with 110,000 troops? Isn’t it that now you are begging the Taliban to negotiate?”

The Iranian commander, who according to the Guardian once called US soldiers in Iraq “pants-pissing wimps” during a visit to Syria, also threw further insults, saying: “Have you forgotten that you were providing your soldiers with adult nappies and today you are threatening us? What the hell could you do in the 33-day war [between US ally Israel and Hezbollah in Lebanon in 2006] other than accepting Hezbollah’s conditions for an end to war?”

Strait of Hormuz
The most dangerous aspect of the US sanctions campaign for Iran is Washington’s demand that all countries cease buying Iranian oil by November 4. Oil export revenues are indispensable to Iran’s economy and Tehran has threatened to block the Strait of Hormuz in response to Trump’s move against its oil sales. Some one-fifth of the world’s oil is shipped through the passage from the Persian Gulf to the open sea. Analysts have warned the oil price could skyrocket to $250 a barrel if Iran follows through on its threat to close the strait.

Further assailing and ridiculing the Trump administration, Suleimani outlined how Iranians are incredulous that it is aligning itself with the extreme Mujahedin-e-Khalq (MeK) Iranian opposition group, commonly thought of as a cult-like organisation by analysts. MeK lost out when the spoils were shared after the 1979 Islamic Revolution, went on to take Iraq’s side in the Iran-Iraq war, went into exile in Albania and has no apparent support of any significance inside Iran. “America had some grandeur in the past, but today, you have gathered these hypocrites who are Iran’s trash,” Suleimani said.