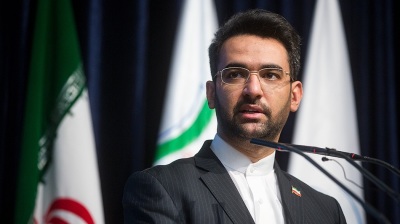 Iran's technology minister Mohammad Javad Azari Jahromi hit out at "Trump's fairytales" after being sanctioned by the US in the wake of the internet blackout.
By bne IntelliNews November 24, 2019

Iran’s internet connectivity stood at more than 70% of its usual level by November 23, according to Netblocks, an international organisation that tracks disrupted provision of the world wide web.

In an unprecedented move for a big country, national security officials in Iran shut down the internet almost completely for nearly six days after protests broke out in the wake of the sudden introduction of a hefty petrol price hike and in many cases transitioned into anti-regime riots and demonstrations—although the level of the anti-regime sentiment on the streeets became impossible to gauge for independent media after the country was plunged into internet ‘darkness’.

Amnesty International on November 23 revised its estimated death toll from the unrest to 115, from 106. Iranian officials have described its numbers as “fabricated”.

The protests are thought to have spread to more than 100 Iranian cities. Iran’s Islamic Revolutionary Guard Corps (IRGC) said on November 22 they have arrested about 100 leaders of protests, according to the official IRNA news agency. Around 1,000 demonstrators were arrested the authorities say.

Amid the return of the internet there were reports of some services only available in a partial format. Messaging app WhatsApp, for instance, was reportedly lacking voice and video operability.

Iranian Information and Communciation Technology Minister Mohammad Javad Azari Jahromi, has been sanctioned by the US in the wake of the internet shutdown for, according to Washington, playing a significant part in the “widescale internet censorship”.

In response, the minister stated on Twitter: “I’m not the only member of [the] club of sanctioned persons (Based on Trump's fairytales). Before me, Iran ICT startups, Developers, Cancer patients and EB children were there. I’ll continue advocating access to Internet & I won’t let [the] US prohibit Iran development.”

Meanwhile, Mohammad Mosaed, a journalist in Tehran, who works with local news outlets and who was apparently able to connect to the world wide web during the protests last week has been arrested, according to posts on social media. It was announced that he had been arrested and that his Twitter account had been deleted, Canadian-Iranian journalist Samira Mohyeddin said on November 23.

Foreign registered and accredited journalists in Tehran including Bloomberg and New York Times correspondents were quiet during the unrest, with only a tweet on the snowfall in the country emerging. New York Times reporter Thomas Erdbrink lately had his credentials rescinded for more than six months by Iranian officials.

Expatriate Iranian reporters covering the mass protests from abroad have been targeted by regime forces including the IRGC and multiple espionage agencies.

The International Federation of Journalists (IFJ) said on November 22 that several Iranian journalists living abroad have endured targeted harassment. A journalist of a Persian-language TV channel based in Europe told the IFJ: “The security forces recently called my parents, summoned them, and asked them to convince me to stop my career here.”

In anoter case, the family of a journalist was said to have been warned that “if your son does not quit his job, our agents will take him back to Iran by force”.

On November 23, Iranian Vice President Eshaq Jahangiri warned regional neighours that they "won't have an easy life" if they are found to have had a hand in the unrest. Tehran has blamed foreign enemies including the US, Saudi Arabia, and Israel, as well as "thugs", for some of the worst public violence in Iran in a decade.

Images on state television on November 23 showed thousands of Iranians marching in rallies of support for the government in several cities.

"All the forces of the Revolutionary Guards, the [paramilitary] Basij, the Intelligence Ministry, police, and the army took part actively in controlling the situation," Parviz Tavassolizadeh, who heads the powerful Judiciary in Kermanshah, in western Iran, was cited by Fars news agency as saying on November 23.