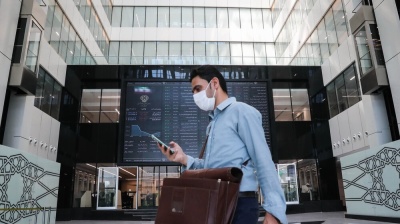 Some sovereign help is on the way for the Tehran Stock Exchange. / Maryam Kamyab, Mehr.
By bne IntelIiNews September 8, 2020

Iran has earmarked 1% of its sovereign wealth fund (SWF) to stabilise the country’s stock market, the main index of which has lost over a fifth of its value in a month, triggering anxieties that further falls are ahead, the semi-official Mehr News Agency on September 8 reported government spokesman Ali Rabiei as saying in a press conference.

The capital injection would be made on September 12, he added. The report didn’t give details of how the mechanism would work.

Iran’s SWF, the National Development Fund, was established in 2011 and draws most of its capital from oil income. It hasn’t published data on its size since the US reimposed heavy sanctions on Iran in 2018. In May 2016, Mehr said it stood at $80bn, according to Bloomberg.

Despite the hammering the Iranian economy has taken in the past two years from US sanctions and more lately from the coronavirus (COVID-19) crisis, many Iranians have sought refuge in the country’s stock market—high inflation and a collapsing local currency cause those who hold cash to lose money at a rapid pace, thus wagering on the TSE is seen as offering a hedge against this risk with assets that remain liquid, partly thanks to the government’s commitment to back the bourse via its privatisation programme. Nevertheless, there are those who say the exchange’s benchmark index, the TEDPIX, is a bubble that has gone much too far and threatens to explode over the heads of somewhat desperate investors with a juddering correction.

The TSE rally was partly driven by a government decision to sell state assets worth around $2bn to raise funds to assist in the fight against the coronavirus.

The Mariupol siege is over as the last Azov defenders surrender
2 hours ago
Kyrgyzstan: Eccentric health minister fights for his job amid claims of corruption and bullying
16 hours ago
Azov commanders have remained behind in the Mariupol steelworks to continue the fight
17 hours ago
Russia hopes Chinese carmakers will help revive Moskvitch brand
18 hours ago
Russia may leave the WTO and WHO. In practice, it never really joined
18 hours ago