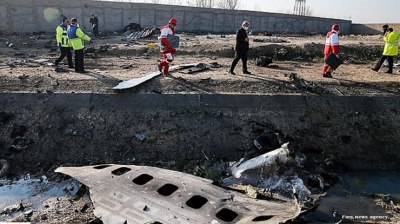 Iran’s Civil Aviation Organisation has said that a misaligned missile battery, miscommunication and poor chain of command were the cause of the downing of the Ukraine International Airlines (UIA) PS752 flight from Tehran to Kyiv on January 8.

The flight, which was meant to fly normally, was shot down outside of Tehran on January 8, killing all 176 people on board. Iran has yet to return the black boxes for international investigators despite claiming responsibility, leading to concerns that the country was not being entirely honest about events on the winter night.

Authorities in Tehran had initially denied responsibility, only changing course after online investigations forced them to backtrack.

The civil aviation report does not acknowledge that, only saying a change in the “alertness level of Iran’s air defence” allowed previously scheduled air traffic to resume.

The report added the surface-to-air missile battery that targeted the Boeing 737-800 had been relocated and was not correctly reoriented.

“At the time of firing the first missile, the aircraft was flying at a normal altitude and trajectory,” the report said.

Ukrainian President Vladimir Zelenskiy has now threatened to take the Islamic Republic and Islamic Revolutionary Guards Corps to court if it does not fulfil its promises regarding investigations.

Ukrainian forensics head Alexander Ruvin from the Kyiv Research Institute of Forensics has suggested from evidence obtained that passengers on UIA flight PS752 were out of their seats before two missiles hit the plane outside Tehran in early January, Glavcom reported.

“And [yet] we saw the corpses of the dead lying on the ground, without seats. To make it clearer to you, I would say that if the people were fastened, they would fall with their seats, as was the case with passengers of [shot-down] flight MH17 [in Ukraine]. And what we saw in Iran means that there was already panic on the plane. There is reason to believe that it was burning inside and through the holes, black smoke came out.”