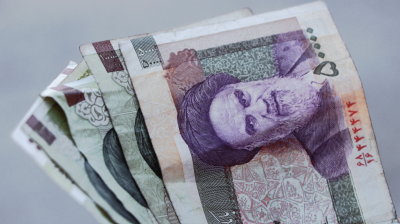 The Iranian rial (IRR) continued to slide against a basket of foreign currencies on the open market, with the USD trading for IRR367,500 by the end of the day, the weakest ever rate of the rial versus the dollar. The euro and pound also hit records of IRR367,050 and IRR421,700, respectively, on November 7, according to currency website Bonbast.

Foreign currency buyers now need to go to website my.ice.ir, register their request for FX and await permission from a CBI official. Only with the permission, can the buyer approach a currency trader.

Traders in Tehran believe the collapse of the rial has some way to go amid economic and political tensions caused by the unrest that has swept Iran in the past seven weeks and the dashing of hopes that talks for a revival of the 2015 nuclear deal, which would bring about the lifting of US sanctions, could soon get back on track.

Local banking magazine Banker on November 6 asked traders if they believed the rial would continue in a downward spiral if the dollar broke IRR362,000.

The consensus was that it would decline further as traders on the market were continuing to load up on USD.

“However, some traders pointed to the central market maker's battle over the dollar price and said that the dollar rate in the market may be revised again today,” the magazine wrote.

bne IntelliNews spoke with a currency trader in Tehran. They said: "Part of the downward pressure on the rial is because of expansive monetary policy whilst the economy is contracting, as in they are printing too much money."

In the current political environment dominated by the street protests, there is increased psychological pressure to flee the rial and convert savings into other assets. In the medium term, this will lead to higher property prices.

The trader added: "The capital controls used by the government will exacerbate the panic and lead to a run on the rial. So what we are seeing is just the beginning of a potential 50% depreciation."

The heavy-handed state approach to FX has been criticised by traders and currency hawkers on Tehran’s Ferdowsi Street, the epicentre of legal and black market currency trading in Iran.

“We hope that with the new currency policies, the tension in the market will subside,” Farshad Taghavi, a trader involved in importing machinery from abroad, said, following the change in rules.

In the Iranian parliament, debates raged over how to handle the rial and FX situation, with all other options mostly exhausted.

Somayeh Mahmoudi, a member of the parliamentary economic commission, said in an interview with Donya Eqtesad newspaper that the state budget would have to update the price of the dollar.

Mahmoudi said: “I do not know what the price of the dollar will be by the time the budget is presented, but the dollar rate in the budget must be updated.”

“The current situation is due to the mandate of the currency market. Liquidity should be directed correctly, but unfortunately, we do not direct liquidity correctly and the market determines the price,” she added.

Mahmoudi also said: “There is a lot of liquidity and stray money in the country. People are afraid that the value of the rial will decrease, so they go over to foreign currency or gold.”