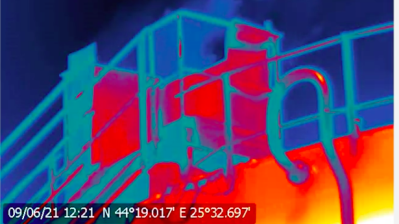 Two NGOs have detected dozens of methane leaks at locations across Romania, including next to a children’s playground in a residential area.

As well as the threat it poses to the health of those exposed to leaks, methane is also a powerful pollutant that has 80 times the warming power of carbon dioxide during the first 20 years after it reaches the atmosphere. Such leaks – also detected in several other EU member states in an earlier investigation – thus put at risk the bloc’s emissions reduction goals.

The study carried out by local 2Celsius Association and international NGO the Clean Air Task Force (CATF) documented, for the first time in Romania, methane emissions from oil and gas installations at around 50 sites, a press release from 2Celsius said.

The research was conducted between June 7 and 17, using an infrared camera and a special sensor to identify the level of methane emissions from sites owned by Conpet, OMV Petrom, Transgas and several other companies.

The two NGOs made public their findings at the sites in a series of videos released via the Cut Methane website.

“One of the leaks highlighted in the study was in the two of Campina, where a video details how “we found two wells, twenty metres apart, in the parking lot of an apartment complex”.

“A children’s playground wth slides, swings and a merry-go-round sat in the middle of the two wells. As we walked up to the well we could smell the dangerous [fumes],” said the video. An infrared camera was used to reveal the leaking gas as children played nearby.

“A person who has lived in the apartment complex for almost twenty years said to us: ‘It always smells like that. We’re used to it'," the report added.

The Romanian study follows previous research by CATF that uncovered evidence of methane pollution at more than 220 oil and gas installations in 11 European countries.

"Methane emissions from the oil and gas sector in Romania are very widespread," said James Turitto, CATF campaign manager, according to a press release. "But it is important to remember that the shows we have documented are not the only ones. Everywhere I've been in Europe, I've seen methane pollution from oil and gas installations. We need a strong EU policy to ensure that all countries are committed to reducing methane emissions. "

Methane pollution was singled out in the recent report from the Intergovernmental Panel on Climate Change (IPCC), which pointed to the need to dramatically reduce global emissions of methane, as well as carbon dioxide.

"With the recent findings of the IPCC, we know that the planet cannot afford more delays in the fight against methane," said Jonathan Banks, CATF's international director.

"Reducing methane pollution is the only way to substantially slow down global warming over the next 20 years. Therefore the European Commission's future methane strategy is vital at both European and global level. "

“Methane is the second-biggest contributor to climate change, after carbon dioxide. It is also a potent local air pollutant causing serious health problems. Tackling methane emissions is therefore essential to reaching our 2030 climate targets and the 2050 climate neutrality goal, as well as contributing to the Commission's zero-pollution ambition,” said a Commission statement issued at the time.

Among the main goals of the strategy is to reduce methane emissions in the energy sector, including through a requirement to improve detection and repair of leaks in gas infrastructure. There are also plans to tackle methane emissions from agriculture and the waste sector.

Romania is one of Europe’s oil and gas producers, and is set to step up production in the coming years as offshore capacity in the Romania sector of the Black Sea comes online. The country also has significant refining capacity.

"Romania has significant problems with its oil and gas production infrastructure and is a major methane emitter in the EU," said Mihai Stoica, 2Celsius' executive director. "These issues will not be resolved overnight, but we must start working on them now."