Russia remains responsible for the lion’s share of outward FDI investment; indeed it is the only EEU member that is a net exporter of FDI to other countries in the bloc.

Overall, Russian companies accounted for over 78% of the stock of FDI in its fellow EEU member states, followed by Kazakhstan trailing behind with 13.5% of the total and Belarus with $8.2bn. FDI from Armenia and Kyrgyzstan flowing into other EEU members was minimal.

Key mutual FDI growth factors in 2016 were the strengthening of the Russian ruble and recovery of economic activity in Russia, the EDB report, Monitoring of Mutual Investments in CIS Countries 2017, said.

In terms of sector, the largest volume of FDI was channeled into the oil and gas sector, which accounts for 43.3% of the total in the hydrocarbon rich region. Other major sectors are non-ferrous metals (mostly due to Russian capital investments in Kazakhstan and Armenia) and communications and IT, again mainly Russian investments in fellow EEU members’ mobile phone networks. Finance is another important sector, with Russian — and to some extent Kazakh — banks active in various countries across the region.

Mega investments by mostly Russian energy and mobile telecoms companies accounted for the lion’s share of FDI stock. The largest single project is PJSC Gazprom’s gas-transportation subsidiary in Belarus, followed by Lukoil’s investment in Kazakhstan; its one of the developers of the giant Karachaganak field where there are plans for a $4.5bn expansion.

Another major deal was the $1.7bn purchase of a 20% stake in potash major Uralkali by a little-known Belarusian company called Yuras Oil in 2016. The single investment accounted for the lion’s share of the increase in FDI into Russia. However, as the EDB report notes, “It is hard to say to what extent this investment project is “truly” Belarusian.”

Aside from these deals in the oil and gas sector, the EDB report points to major telecoms investments such as MTS in Belarus and VEON (formerly VimpelCom) in Kazakhstan. 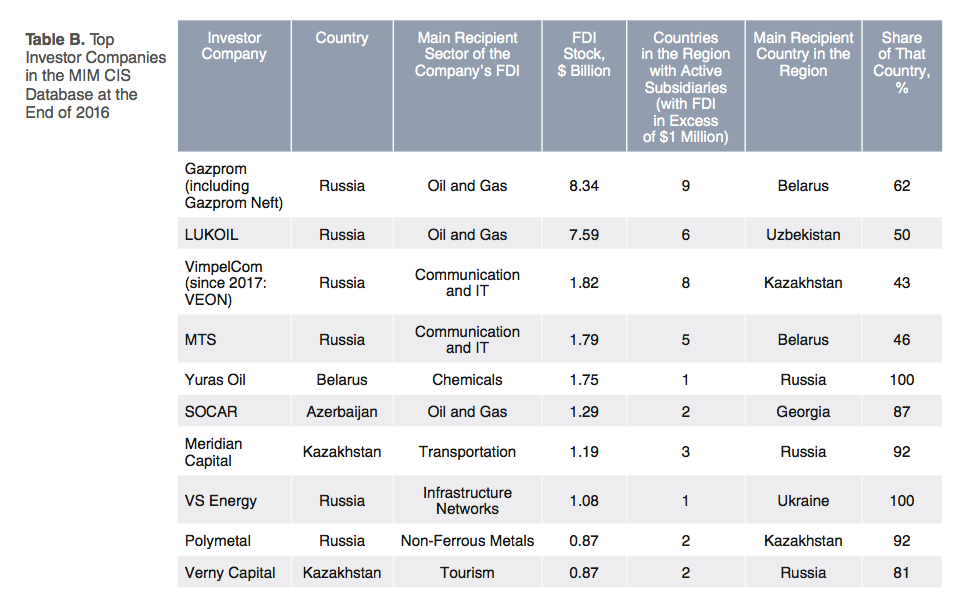 Alongside Russian investment into other EEU countries, the EDB notes  “There is a new development observed in the region – Russia does not only invest in other EAEU economies, but has also started receiving an increasing amount of investment from neighbouring countries”. In 2016, the investment stock from fellow EEU countries reached $5bn.

“Russia is, quite naturally, one of the key centres of attraction for post-Soviet FDI due to the 'neighbourhood effect' and the linguistic, cultural, and historical proximity,” the report explains.

“It is no coincidence that Belarusian, Kazakh, and Armenian investors had maintained business ties with their Russian partners long before making FDI in Russia. Besides, Russia has a rather diversified economic structure and a capacious market that encourages business expansion by EEU entrepreneurs. Finally, Russia has a huge real estate market with tremendous investor appeal.”

A case for EEU membership

While investment flows both in and (especially) out of both Armenia and Kyrgyzstan were relatively small, an increase in FDI inflows is seen in both countries. They both decided to sign up to the bloc much later than its three founder members — Russia, Belarus and Kazakhstan — and the pros and cons of membership were the subject of a longer debate.

Armenia, writes the EDB, ended 2016 on a positive note; total Armenian inward FDI stock from CIS countries increased by 9.9% to over $3.6bn, of which $3.44bn was from EEU members.

This is likely to be good news for Prime Minister Karen Karapetyan’s government, which recently faced a challenge from Yelq, the pro-Western opposition party that is pursuing an “Armexit” from the EEU. Although the ruling Republican Party saw off an attempt by Yelq to set up a committee to examine the issue, it was symptomatic of the fact that many Armenians were dissatisfied with the decision to lead the country first into the Customs Union and later the EEU rather than pursuing integration with the EU.

Still, the EDB warns, the “current position of Armenia with respect to FDI flows is rather unstable. The country keeps going up and down in investment attractiveness ratings, and in recent years foreign investment flows have demonstrated a downward trend.”

In terms of inward investment, Russia accounts for over 95% of all investment into Armenia from the former Soviet countries and almost 100% of investment from the EEU. A fair amount of this is actually from ethnic Armenians who are Russian citizens and have become successful in their adopted country. Businessman and philanthropist Ruben Vardanian, for example, is the owner of Armenia’s largest bank Ameriabank.

Aside from the financial sector, most of the FDI received by Armenia was channeled into sectors like infrastructure, metals and mining, communications and IT, and transportation.

“The trends currently shaping FDI flows to Armenia within the CIS indicate that the Russian dominance, based on both objective factors (investment environment) and subjective factors (Armenian diaspora), will persist in the future,” the EDB forecasts. “However, adverse economic developments in Armenia over the last several years will deter investors from the other CIS countries.”

The government in Bishkek is also likely interested to see how the country has performed during its first full year of membership in the bloc; Kyrgyzstan is the newest member of the EEU, having joined in summer 2015. The report is positive: FDI inflows from EEU member states rose by 11% to $1.5bn as of the end of 2016, with a 21% increase in investment from Russia only partly offset by a slight dip in Kazakh investment.

The development bank anticipates investment from Kazakhstan and Russia will increase in future, assuming EEU membership helps Bishkek improve an image tarnished by two revolutions and a decade of political upheaval, although it’s not expected to overtake fellow members in attracting investment any time soon.

“On the whole, the position of Kyrgyzstan at the bottom of the list of recipients of FDI originating from the EEU is fully justified, considering the relatively modest economic potential of the country and the political turmoil that has afflicted it throughout the 2000s,” says the EDB. The coming weeks will be critical, as the October 15 election will test whether Kyrgyzstan can make its first peaceful handover of power from one president to another.

The study also looks at investment within the wider CIS plus Georgia region. Outside the EEU, Azerbaijan is the only CIS country aside from Russia that is a net exporter of direct capital investments into the region.

“Despite the adverse economic climate, Azerbaijan is still prepared to invest its capital in the region, primarily in transportation projects,” notes the report, referring to the “nonstop growth” of Azerbaijani FDI in the post-Soviet space, which topped $2.4bn in 2016. The Caucasian country now has multi-billion dollar investment projects in five states — Belarus, Georgia, Kazakhstan, Russia and Ukraine — with a focus on large-scale transportation projects like the Baku-Tbilisi-Kars railway and the Kulevi Oil Terminal in Georgia.

Once the top recipient of FDI in the CIS region, the stock of investment in Ukraine has slumped from $17bn in 2013, the year before Russia annexed the Crimea and war broke out in Eastern Ukraine, to just $5.6bn in 2016. “It is quite possible that in 2017 Ukraine will be overtaken not only by the trio of EEU founders but also by Uzbekistan, where the 2016 year-end figure was $5.4bn,” forecasts the EDB.

While a net importer overall, Georgia is a surprisingly large exporter of capital to the CIS given the small size of its economy, but the bulk of its outward investments — at least until 2012 — was due to billionaire former prime minister Bidzina Ivanishvili’s investments in Russia. 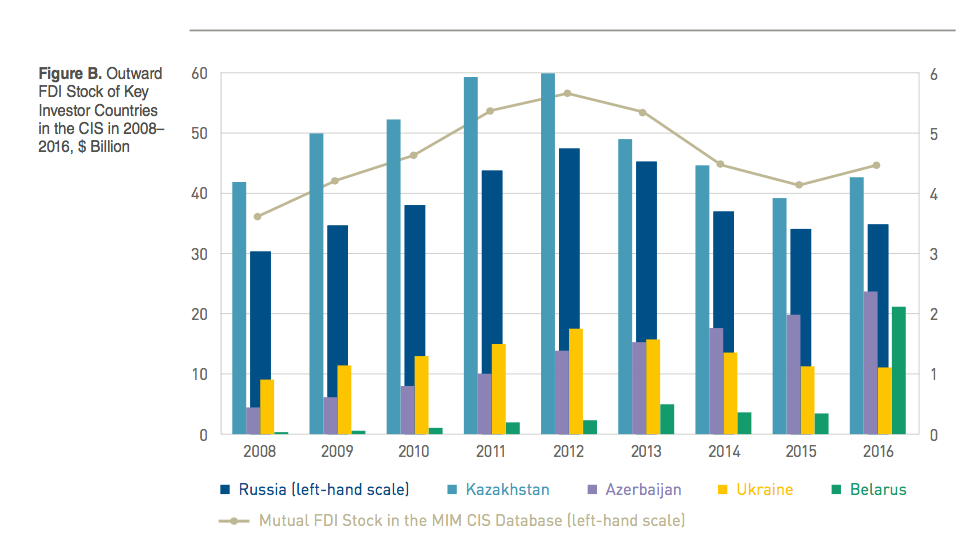 Some Nasdaq Baltic indexes show a noticeable improvement since the news of successful coronavirus vaccine trials broke earlier this month.