Macedonia’s finance minister admits in an interview with bne IntelliNews that serious allegations of abuse of power against his government have had an impact on prospective foreign investors, but insists the investors, whom he did not specify, would continue with their plans now the crisis looks to be at an end.

Zoran Stavreski refuses to be drawn on the specific allegations, which include vote rigging, the undermining of judicial independence and covering up murder evidence. The controversy led to street protests, and an EU-brokered deal between the government and opposition that will bring early elections in April next year, with a caretaker government to be installed in January to oversee the poll. “What is good is that no new investors have cancelled plans for investing in Macedonia,” claims Stavreski. “However, we need to be frank and admit that because of the political crisis, some have temporarily decided to wait for some time.”

The allegations come from apparently wiretapped recordings released by the opposition – which the government accuses of organising a “coup” through illegally-acquired materials – and implicate Prime Minister Nikola Gruevski and other senior officials. In one of the recordings, a voice that is apparently Stavreski’s seems to say that Gruevski had “lost sense of reality”, and slams the government’s economic policy as mad. “We are constantly adding new [budget] expenditures. Even the United States could not withstand this... pedestrian tracks, aqua parks, this and that... this is insane!” the voice says, according to a report by Balkan Insight. “We are lunatics! We are spending on chocolate when we don't have bread.”

Stavreski has not denied the recordings are of his voice, but says that they have been “spiced up” a little. “When it comes to the image of the government, allegations are allegations and there are allegations everywhere in the world in terms of what has been done and what has not been done. Our position is that institutions should do their job and investigate all their cases, and wherever there is individual responsibility – if there is any – the institutions should behave like in every EU country,” he says.

A special prosecutor has been appointed to investigate the claims, who has said that the first charges could be put in place before the April election. However, the opposition is already questioning the independence of the process.

Avoiding direct denial, and emphasising the importance of the investigation, is very much the government line, though many officials add criticism of the opposition’s use of allegedly illegally-acquired recordings.

It was clearly not a topic on which Stavreski – who at one stage in the interview took a telephone call from the prime minister – wished to dwell. The Macedonian government is at pains to stress its economic credentials at a time when its democratic and European ones are being questioned.

Macedonia rode out the global economic crisis and the Eurozone’s near-meltdown through the efficacious use of fiscal stimulus, but Stavreski says the government will keep an eye on public finances to ensure that its currency peg does not come under pressure.

Stavreski draws an unveiled comparison between the recent experiences of Macedonia on one hand, and “peripheral countries in Europe and some neighbours”. Many of the latter were of course forced into pro-cyclical fiscal tightening when the crash came, exacerbating the downturn after years of mirror-image pro-cyclical stances of loose policy fuelling booms. Greece is both a neighbour and a peripheral Eurozone country, and continues to block Macedonia’s EU and Nato accession processes over tedious historical arguments about its name.

Stavreski argues that Macedonia’s relative pre-crisis frugality allowed it to loosen policy when it was most needed. “I’d say our fiscal policy was reasonable, before the crisis, after the crisis, and during the crisis, in the following way. Before the crisis, when Macedonia had growth rates of between 5% and 6%, we had surplus revenues, and reduced public debt from 33% to 23% of GDP. When the crisis happened, we had a very favourable starting position, and during the crisis… we increased capital expenditures, infrastructure spending. That helped a lot both in the short run by increasing our GDP and creating jobs and activity for the construction sector and other connected sectors, and in the long run these infrastructure investments are important for improving the competitiveness of our economy.”

The sustainability of this fiscal stimulus, however, is starting to be questioned. Macedonia’s economy is expected to grow by 3.0% this year and 3.5% next, according to a July report by Erste Group. But after Stavreski’s bne IntelliNews interview, he announced a draft budget for 2016 that pencilled in the country’s biggest-ever outlay. The draft foresees spending of €3.18bn, 6% up on 2015. The budget is based on an optimistic GDP growth forecast of 4%.

Before the budget, Erste had forecast a deficit of 3.6% this year and 3.4% next, with debt rising to 41.5% of GDP in 2016. It said that public debt would move towards 50%, with “strong upward pressures” from road construction and the state-owned electricity company.

Opponents say that debt may well be higher than reported, and that the government administration has swelled, as the ruling VMRO-DPMNE party looks to bolster its support ahead of the election by spreading patronage via sinecures. Meanwhile, some of the vaunted infrastructure spending has been channelled to the Skopje 2014 project, a makeover of the capital’s centre intended to boost national pride and the city’s appeal as a place to live and visit. Others see it as a bizarre and unattractive vanity project that has funnelled money to preferred contractors.

Stavreski defended state employment levels, but he made clear that the budget must not be allowed to get out of control – with a side observation that fast-and-loose fiscal policy will endanger Macedonia’s currency stability, and thus risk overturning the economy entirely. Macedonia maintains a currency peg, fixing the denar against the euro. “Debt is kept at a level which is not particularly going to risk our debt sustainability,” he says. “For a country like Macedonia, a small country with small forex reserves and a fixed exchange rate regime, there’s a need to keep the budget deficit under control or you’ll put pressure on foreign exchange, and we don’t want that situation.”

Returning to the issue later in the interview, Stavreski described managing public finances as “an art more than a science”, while asserting that the country has a fiscal plan starting in 2017 (conveniently after the election) to rein in the deficit. “We will have a gradual reduction in the next several years, to enable us to keep our debt at a sustainable level, while gradually reducing public support for growth. In the meantime we expect that the private sector will take over and increase its investments. We have to be more careful, as we are a small country with small GDP. For us it was important to adopt a strategy on public debt and fiscal consolidation which would keep Macedonia’s debt stable, or at a sustainable level.”

Opening up through infrastructure

However, the government insists that investments are necessary to underpin long-term growth. When Macedonian officials are asked to name a weakness that their country has, they invariably mention its landlocked position. Infrastructure such as a restored railway link to Bulgaria, and highway development along European transport corridors VIII and X are intended to mitigate this to the greatest extent possible.

The government is also seeking investors to build a large new hydroelectric plant, an investment of several hundred million euros, as well as energy distribution networks in Skopje and other parts of the country. “There are various other investments in the areas of education, the health sector, environment, and many others,” Stavreski tells bne IntelliNews. “Competitiveness means not only taxes but labour costs, logistics and infrastructure. We invested in all these areas and it helped a lot in attracting investors. It’s a difficult game, as we were unknown as a country.”

He points out that most countries in the region have low taxes (Bulgaria has the EU’s joint-lowest flat income and corporate tax rate at 10%), while administrative reform to make the system more investor-friendly has also been important.

After years of glossy advertisements in international business magazines, Stavreski trumpets the country’s high ranking in the World Bank’s “Doing Business” survey. It ranked 30th in 2015, the highest in Southeast Europe (including Greece and Turkey), and sandwiched between Japan and France. The country has major investors including Dräxlmeier, Johnson Controls, and Johnson Matthey. And in May despite the ongoing political stramash, Lear Corporation announced plans to open an automotive seat cover plant in Gostivar, in northwest Macedonia.

Many of these investments are in industrial free zones, so the value that they feed back to Stavreski’s coffers has been questioned. But in a country where unemployment tops 25%, keeping the investment coming in remains a priority. 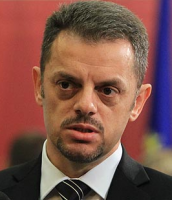