ING: Polish inflation continues to rise at a strong pace, but recession avoided for now 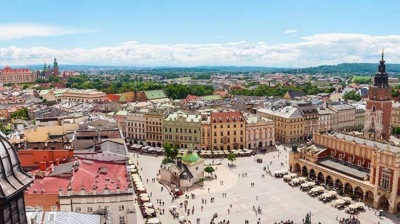 Poland is still suffering from high inflation, but the central bank has decided to end the tightening cycle anyway. And the economy seems to have avoided a recession, but the road ahead will be tough. / bne IntelliNews
By Rafal Benecki ING’s chief economist for Poland, Adam Antoniak senior economist at ING November 16, 2022

The Polish statistics office confirmed its estimate of October CPI at 17.9% year on year. We estimate that core inflation rose to 11.2% from 10.7% y/y in September. Our concerns about high core inflation are shared by economists at the National Bank of Poland. Despite this, the MPC has decided to essentially end the rate hike cycle.

We already knew from the flash CPI estimate that the significant increase in food and fuel prices was mainly responsible for the increase in inflation last month relative to September. On the other hand, there was slightly less pressure from energy carriers, as prices grew at a slightly slower rate (1.9% month on month) than in August and September, mainly due to the deceleration of coal price increases. This does not change the fact that energy carriers are now more than 40% more expensive than a year ago, despite the Anti-Inflation Shield (VAT and excise tax cuts) covering electricity, gas, thermal energy prices, and the freeze on regulated prices throughout 2022. 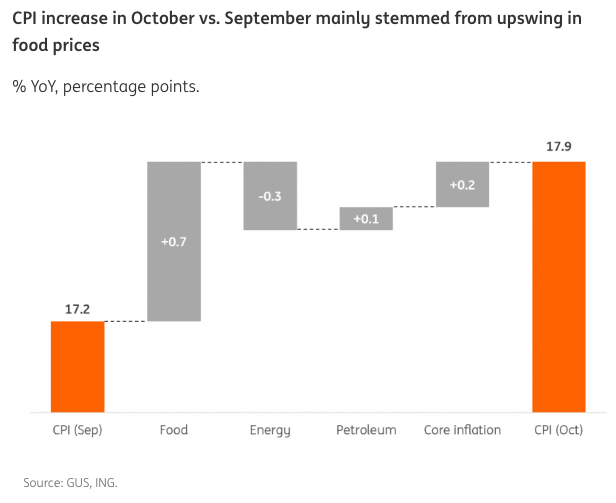 We are now seeing the effects of the energy shock (more expensive fuel and energy carriers), but the most worrying phenomenon is the propagation of this shock in the economy and the increasing spillover of price increases due to secondary effects. Rapidly rising core inflation confirms that the impulse from this side is strong, and its impact on prices may be long-lasting. Based on the CPI structure data in October, we estimate that core inflation rose by about 1.1% month on month to 11.2% from 10.7% y/y in September.

Our concerns about the high core inflation and the spillover of price increases across the economy are shared by economists at the central bank. In its November projection, the National Bank of Poland said that high inflation expectations of companies and households translate into greater acceptance of price rises in many sectors of the economy, increasing its persistence. At the same time, the minutes of the October meeting noted that in light of the inflation expectations of companies, households and professional forecasters, the level of real interest rates remains negative. Despite this, the MPC has decided to essentially end the cycle of interest rate hikes and has adopted a wait-and-see attitude. Policymakers prefer a gradual and slow decline in CPI to the target. In our view, such solutions mean that ultimately the cost of fighting inflation will be higher.

Poland avoids recession but we see bumpy road ahead

In line with our expectations, Poland’s economy expanded by 3.5% y/y in 3Q22 (consensus: 3.0% y/y) as activity bounced back by 0.9% quarter on quarter (seasonally adjusted) after falling by 2.3% q/q in 2Q22. As such, Poland has avoided a technical recession but is braced for some difficult months ahead.

According to the flash estimate, GDP growth slowed to 3.5% y/y in 3Q22 from 5.8% y/y in 2Q22. The lower annual growth rate was a consequence of the high reference base from last year and the turnaround in the inventory cycle, which is no longer adding to GDP as it did in the first half of 2022.

Seasonally adjusted data shows that the outbreak of the war in Ukraine dampened economic activity in 2Q22 (GDP down 2.3% q/q). However, 3Q22 saw a solid rebound (0.9% q/q) and the economy avoided a technical recession. 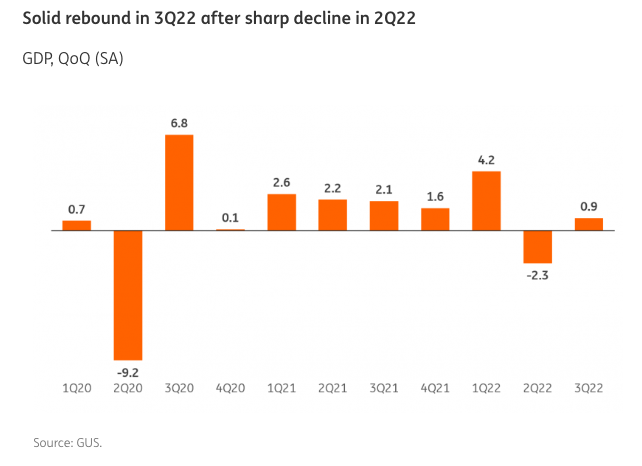 Industry and exports holding up well

We do not yet know the composition of economic growth (to be released on 30 November) but the high-frequency data suggests that industry continued to perform well. This is a very bright spot for the Polish economy and the main point of outperformance vs regional peers since the beginning of the pandemic.

In 3Q22, manufacturing was supported by improvements in supply chains (including the availability of semiconductors), which boosted production in Poland and among our trading partners. The foreign trade balance most likely contributed positively to annual GDP growth, while consumption and investment had a markedly smaller positive impact as they grew much more slowly than in the previous two quarters. We estimate that growth in 2022 as a whole will be closer to 5% than 4% (around 4.8%), compared with 6.8% growth in 2021 (after revision).

The prospects for the future look grim due to deteriorating foreign markets (a possible recession in Germany) and tighter financial conditions both in Poland and abroad (rising interest rates). In addition, high inflation bites into households' real disposable income as wage growth fails to keep pace with price increases. This is accompanied by unfavourable consumer sentiment, which translates into reduced spending on durable goods. Weakening foreign demand and rising financing costs will also have a negative impact on investment activity. An additional source of uncertainly is the stalemate between Warsaw and Brussels on the Recovery Fund, which may hamper public investment.

The high reference base from 1H22 means that we may witness a negative annual GDP reading in early 2023. In 2023, we forecast economic growth at 1.5% but the risks are clearly tilted to the downside. The negative economic outlook for next year is one of the main reasons why the MPC has decided to pause, and de facto end the interest rate hike cycle. The MPC is choosing this strategy despite the prolonged period of elevated inflation and the risk of it becoming entrenched at high levels in the coming quarters.

ING: Europe faces stiff competition for natural gas
22 hours ago
PANNIER: Might Tokayev be the real deal?
5 days ago
OPINION: Bosnia economic salvage supplants breakup mood
10 days ago
ASH: Turkey is heading to “incumbent democracy”
10 days ago
RIMMER: You only sing when you’re winning
11 days ago