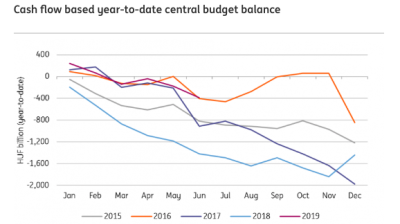 The Hungarian year-to-date general government deficit came in at HUF 390bn - only 39.1% of the full-year target
By Peter Virovacz of ING July 9, 2019

The Hungarian year-to-date general government deficit came in at HUF 390bn - only 39.1% of the full-year target, but we can't really say if this good performance is here to stay

The June year-to-date balance of the cash flow based general government budget came in at HUF 390bn deficit. Firstly, this is way better than expected by the government, as it's only 39.1% of the full-year target. But since the mid-year performance of the budget isn't really proportionate, we can’t say this extremely good performance is here to stay.

However, the last time, when the budget was below the HUF 400bn deficit figure was way back in 2016. But by November 2016, the general budget was in balance, as the government then spent roughly HUF 900bn just in December.

Given this backdrop, we could say the budget situation is in a pretty good situation after all. 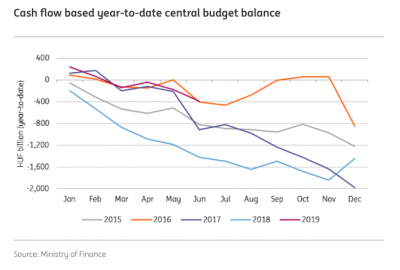 he largest chunk of the deficit is still tied to pre-financed EU projects. In 1H19, the government spent HUF 711bn on EU projects, while receiving only HUF 347bn from Brussels. The revenue side is still fuelled by the tight labour market and direct tax collection but revenues from indirect taxes are also skyrocketing not just on the domestic consumption side but also due to the retreat of the shadow economy.

Finally, one last comparison, which speaks volumes about this year’s outstanding budgetary performance: considering the nominal GDP generated in the past 12 months (containing our estimation for 2Q19), the deficit-to-GDP ratio in the last four quarters sits at 0.9%. In our view, it would take a major downturn for the budget to not to meet the 1.8% deficit target by the year-end. 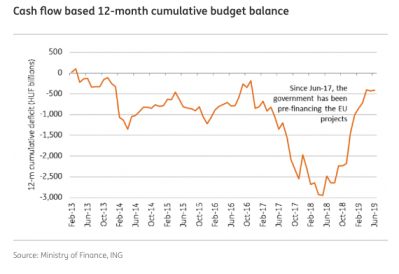 The better-than-planned cash-flow budget is one thing. In the meantime, there is a strong demand for retail bonds, which have increased significantly due to the introduction of the new five-year retail bond. The combination of these two could easily mean the Debt Management Agency needs to do something to not issue more debt than required.

It seems quite unrealistic, that the debt agent will try to dampen the demand for retail bonds. Rather, we see the start buy-back auctions in eurobonds decreasing the FX share of the public debt and/or cutting the supply of Hungarian government bonds as we get closer to the year-end.

Peter Virovacz is an economist with ING. This note first appeared on ING’s “Think” portal here.